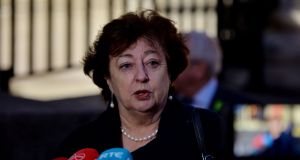 Social Democrats co-leader Catherine Murphy has said it is a “very open question” whether the Oireachtas should deal with the crisis surrounding Supreme Court justice Séamus Woulfe.

Leaders of Government and Opposition parties will meet again this week in an effort to resolve the deepening political and constitutional crisis over the issue.

Chief Justice Frank Clarke told the former attorney general it was his opinion that he should resign from the court.

“My concern is that this is in the area of judgment and character and moral authority. That is more the responsibility of the judiciary to enforce that kind of process themselves,” Ms Murphy told RTÉ’s This Week programme on Sunday.

“There is no mechanism to do that. That is why this is such a difficult decision, because the only available option is the impeachment process. Whether or not Leinster House should be involved I think is a very open question.”

Richard Boyd-Barrett of Solidarity-People Before Profit confirmed his alliance may consider putting forward such a motion. If that occurs, the Houses must act quickly and deal with it within five working days.

A meeting between the Taoiseach and leaders of all parties and groupings on Friday afternoon finished inconclusively, with no certainty or agreement over whether triggering an impeachment process to remove Mr Justice Woulfe would be appropriate or proportionate.

“There was no obvious solution at last Friday’s meeting and essentially it was about taking soundings,” Ms Murphy said.

She said an impeachment committee could be set up and hearings could be held, but this then could be appealed to the Supreme Court. “That becomes a very drawn-out process.”

She said she had concerns that a precedent would be set in terms of what is defined as misbehaviour.

Asked about reports that other judges may resign in protest, Ms Murphy said it would be “foolish not to pay attention” to them.

“There isn’t an easy solution to this.”

Opposition parties are calling on Minister for Justice Helen McEntee to answer questions on the process surrounding Mr Woulfe’s appointment this week.

“There are a number of questions that need to be answered.”