Inquiry faces prospect of challenge in European Court of Justice 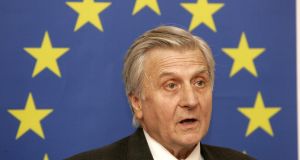 Jean-Claude Trichet: release of correspondence between the then ECB chief and the late Brian Lenihan has intensified clamour in Dublin for central bank to appear before inquiry. Photograph Dara Mac Dónaill

The Oireachtas banking inquiry faces the prospect of a legal challenge in Europe’s highest court if it wants to compel the European Central Bank (ECB) to appear before the investigating committee.

The release of correspondence between then ECB chief Jean-Claude Trichet and the late Brian Lenihan in the run-up to Ireland’s bailout in 2010 has intensified the clamour in Dublin for the central bank to appear before the inquiry.

The ECB governing council has yet to discuss the matter formally but there is no great enthusiasm in the bank’s Frankfurt headquarters for any of its officials to go before the Irish panel, which plans public hearings next year.

There has been no request as of yet from the Oireachtas inquiry. Still, it is understood the ECB has advice to the effect that it is not under any legal obligation to participate in such a national inquiry.

An informed source, who is familiar with the legal framework within which the ECB operates, said the Oireachtas committee would have no power to compel the central bank to attend if it refused to co-operate voluntarily.

While the ECB’s intentions as regards the Irish inquiry remain unclear, any application from the committee to the ECJ would delay its work.

One complicating factor is that legal actions before this court can be time-consuming, frequently taking years.

Another is that the inquiry must complete its work before the next election, which must take place by the spring of 2016.

However, there is a precedent for a case in national law dealing with the ECB being sent to the ECJ.

Earlier this year the German constitutional court in Karlsruhe referred a case to the ECJ after finding a local complaint against the ECB’s sovereign bond-buying scheme was beyond its remit .

“Never forget that the ECB is accountable to the European Parliament, not necessarily to the national parliaments,” he said.

According to article seven of the statute, “neither the ECB, nor a national central bank, nor any member of their decision-making” shall seek or take instructions from EU institutions or from any government of a member state or “any other body”.

The statute also says the ECB shall enjoy in all member states “such privileges and immunities as are necessary for the performance of its tasks”.