Offaly results: One each for Fianna Fáil, Fine Gael and Sinn Féin 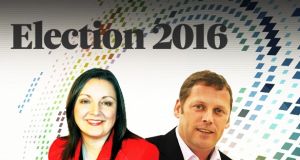 The Offaly side of the old constituency had two sitting TDs: Barry Cowen and Marcella Corcoran-Kennedy. It has meant a spare seat is on offer, with no incumbent.

The Offaly North Tipperary constituency threw up a few election surprises - but Fianna Fáil’s dominance was not among them.

The former five-seat Laois-Offaly constituency has been split into two three-seaters, Laois and Offaly, with Offaly taking in a portion of North Tipperary with a population of around 10,000.

As widely anticipated in the Cowen stronghold, Fianna Fáil’s Barry Cowen topped the poll in the first count, taking a seat with a surplus of over 1,300 votes.

Mr Cowen’s transfers helped the party’s second candidate, Eddie Fitzpatrick, fight it out to the final count, only to be beaten by 170 votes by Sinn Féin candidate Carol Nolan in her first Dáil bid. In all, Fianna Fáil secured a remarkable 36 per cent of the vote in Offaly.

North Tipperary’s Joe Hannigan (Independent) landed a big surprise when he came third out of the 11 candidates in the first count.

Despite retaining his number three spot until the fourth count, he was eliminated as transfers from Offaly began to dwindle. Mr Hannigan’s performance is all the more impressive considering it was his first run at a Dáil seat.

Sinn Féin’s Carol Nolan’s success in the election was probably the biggest surprise of the day. The school teacher and former principal managed to see off competition from Renua Ireland, the Independent Alliance and Fianna Fáil to take the third seat in what was her first general election.

It had been widely believed that Sinn Féin’s chances of the third seat had been irreparably damaged when the Tullamore councillor Brendan Killeavy decided not to run in the election. He had been seen as the party’s most likely prospect in Offaly, where he had secured the most first preference votes in the 2014 local elections.

Fine Gael’s sole candidate, outgoing TD Marcella Corcoran Kennedy, secured 6,838 first preference votes, putting her in second position for a Dáil seat throughout the count. She maintained the lead to take the second seat on the sixth count.

It was a disappointing day for Renua Ireland candidate John Leahy and John Foley of the Independent Alliance. Both candidates were considered to be in the mix for the third seat.

Mr Leahy was in the running for much of the count but failed to attract the transfers he needed. He said he wasn’t sure whether his move to Renua had helped or harmed his prospects but he was thankful to the party for giving him a national platform to highlight rural issues.

In the end, voters in Offaly North Tipperary favoured Fianna Fáil at 36 per cent, Independents and others at 27 per cent, Fine Gael 15.5 per cent, Sinn Féin 11 per cent and Renua 10.5 per cent.

The big surprise of the count came from first time General Election candidate and Kilbarron publican Joe Hannigan from Co Tipperary, who managed to place third out of the 11 candidates on the first count with 5,188. However the Tipperary man didn’t benefit from transfers to the same extent as his Offaly rivals.

Mr Cowen believes the Government “misjudged the mood” of the electorate ahead of the general election.

“I think they misjudged the mood of the electorate,” he said. He said he believes the government got carried away with the success they expected on having closed the gap between income and expenditure.

On the make up of the new Government, Mr Cowen said: “I don’t believe Fianna Fáil and Fine Gael are compatible, they haven’t been compatible for quite some time.”

According to Mr Cowen, the two party’s are so incompatible that Fine Gael would have “a long road to travel” to reach agreement. However, he pointed out that ultimately the “final arbitration” will be by his party membership.

Mr Cowen believes the outcome of the election may have implications for Irish Water. “If you look at the party’s who received the vast majority of the votes, none of them are in favour of the way that whole process has been handled, or the money that was spent and what we have been left with,” he said.

Offaly is a new three-seat constituency. It is one of two-by products of the five-seat constituency of Laois-Offaly being split into two. The Offaly side of the old constituency had two sitting TDs: Barry Cowen and Marcella Corcoran-Kennedy. It has meant a spare seat is on offer, with no incumbent. And with no precedent, it makes any prediction a shot in the dark. The Cowen family has a long tradition of representation in Offaly and Barry has succeeded his brother, former taoiseach Brian Cowen, and late father Ber, to the seat. Even in the meltdown of 2011, Cowen was the hands-down leading candidate in Offaly.

A total of 24 electoral divisions in the former North Tipperary, with a population of more than 10,000, have been taken in. It includes areas around Nenagh as well as Borrisokane and Lorrha. Those areas will affect all three Tipperary TDs in that area: Michael Lowry, Alan Kelly and Noel Coonan.

Outside Dublin the recovery has been uneven, with unemployment remaining comparatively high. Therefore jobs and enterprise are big issues. The hospital in Tullamore is not under the same pressure as facilities in other large towns so it’s not an overriding matter.

The future of Bord na Móna is a big issue. The State-owned company has been a big employer in Offaly over the years and there are concerns about what the future has in store.

In some areas, broadband is of poor quality (or non-existent) and some of the smaller towns show signs of depopulation and neglect.

Renewable energy is another big debating point here. It has been portrayed as the future for the vast bogs. But there have been objections to the location of wind farms, with local communities arguing they have been placed too close to their homes.