O’Sullivan criticised for US trip as gardaí prepare to strike 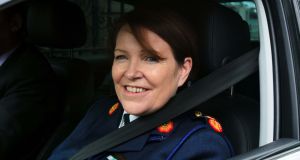 Garda Commissioner Nóirín O’Sullivan is present at the International Association of Chiefs of Police in San Diego and is not due to return until later this week. File photograph: Gareth Chaney/Collins

Garda Commissioner Nóirín O’Sullivan has been criticised for attending a conference in the US as gardaí prepare to take industrial action.

Ms O’Sullivan is present at the International Association of Chiefs of Police in San Diego and is not due to return until later this week.

A Garda spokesman defended Ms O’Sullivan’s absence, insisting she has been in constant contact and has been kept informed of all developments.

He said the commissioner’s attendance at the conference “is a matter of public record” and that she is “ in regular contact with her management team”.

The conference began on Monday and concluded yesterday. The spokesman declined, for security reasons, to confirm when Ms O’Sullivan would return home. However, it is expected she will be back in Ireland by the end of the week.

The Association of Garda Sergeants and Inspectors is to take work-to-rule action tomorrow in a dispute over pay. Strike action is planned by the AGSI and the Garda Representative Association for four days next month.

“There are a number of things that need to be considered in the event of the strike going ahead and the commissioner should be at home leading those preparations,” he said.

Contingency plans have yet to be drawn up by the commissioner and Minister for Justice Frances Fitzgerald.

Department of Justice sources have confirmed no discussions have taken place between the two, despite the impending action.

Ms Fitzgerald is also out of the country, leading a two-day Enterprise Ireland trade mission to France. She is due to return home today.

A spokesman for the Minister said the trip began on Tuesday and had been planned in advance.

“This Enterprise Ireland trade visit is a strong platform to raise Ireland’s profile, position our companies as strategic partners across multiple sectors and demonstrate how Enterprise Ireland can act as a conduit to those world-class goods and services,” he said.