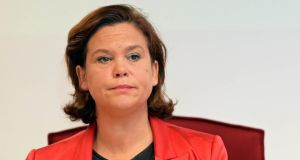 Mary Lou McDonald: “There is nowhere for people to hide now; there is nobody in Sinn Féin holding a candle for anybody who carries out a brutal attack such as murder.” File photograph: Eric Luke/The Irish Times

Sinn Féin’s deputy leader, Mary Lou McDonald, has said it is not the job of her party to solve crime.

Ms McDonald said politicians north and south of the Border had been very quick to seize on two brutal murders and two grieving families, following the murder of Gerard “Jock” Davison and Kevin McGuigan in Belfast.

Ms McDonald said there was a “legitimate concern” that “some former IRA members” might be involved in criminal actions.

“There seems to be a line of inquiry of the murder of Kevin McGuigan that an IRA person may have been involved,” she said in Dublin on Monday.

“If that is the case and if that is established, that person or those people must be pursued, apprehended and prosecuted just as any other person would be.

“There is nowhere for people to hide now; there is nobody in Sinn Féin holding a candle for anybody who carries out a brutal attack such as murder.”

Minister for Foreign Affairs Charlie Flanagan and other politicians have called for Sinn Féin to do more to ensure those who may have evidence on murders should hand it over to the authorities.

Ms McDonald insisted it was not the job of Sinn Féin to solve crime or bring people to justice.

“There has to be a reality check as well around the expectations that Sinn Féin is to answer for every misdemeanour, for every criminal act, everything that goes wrong in certain parts of the country,” Ms McDonald said.

“That is not a reasonable ask . . . Our commitment to policing North and South is absolute and final.”

However, she said the party would “use whatever influence we have to ensure people support the police and act accordingly”.

Renua leader Lucinda Creighton criticised Ms McDonald’s comments and said the issue came down to whether one believed Sinn Féin or the Garda.

Ms Creighton said: “I have to say I would side with An Garda Síochána. ”

She said there was now a risk to the peace process in Northern Ireland and all political parties needed to show leadership.

She added: “Unfortunately that leadership is lacking from Sinn Féin.”