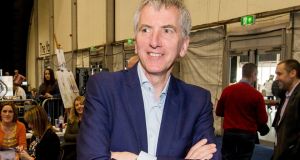 The pressure on the Sinn Féin Minister of Finance Máirtín O Muilleoir has intensified after the Northern Assembly’s finance committee called on him to temporarily step down as Minister as a result of the latest Nama revelations.

The committee met on Tuesday and agreed that Mr Ó Muilleoir should stand aside pending the outcome of an investigation into the allegation that loyalist blogger Jamie Bryson was “coached” by former Sinn Féin MLA Dáithí McKay on how to give evidence against former DUP leader Peter Robinson.

Apart from Sinn Féin committee member Caitriona Ruane all other members of the committee from the DUP, the Ulster Unionist Party, the SDLP and the Traditional Unionist Voice parties said Mr Ó Muilleoir should quit his Ministerial post until the inquiry is completed.

Ms Ruane, who was the only Sinn Féin member at Tuesday’s meeting of the committee, said Mr Ó Muilleoir had acted in an open and accountable manner and had “done nothing wrong”.

DUP committee member Jim Wells compared the is.sue to the Watergate scandal that brought down US President Richard Nixon

The finance committee met to discuss the claim that Mr McKay and a Co Antrim Sinn Féin member Thomas O’Hara were involved in a conspiracy with loyalist blogger Jamie Bryson. Mr McKay resigned as a Sinn Féin MLA as a result of the clams and he and Mr O’Hara were suspended from the party.

It is alleged that Mr Bryson was allowed claim to the finance committee last September that Mr Robinson was to gain financially over the £1.2 billion purchase of Nama’s Northern Ireland portfolio by American investment giant Cerberus. Mr Robinson dismissed that claim as “scurrilous and ill-founded”.

But issues about finance minister Mr Ó Muilleoir were raised because he was named in one of the transcripts of Twitter postings which indicated that Mr Bryson was “coached” on how to give evidence against Mr Robinson.

In one direct message from Sinn Féin member Mr O’Hara’s Twitter account to Mr Bryson’s Mr O’Hara said: “I’m trying to establish what Máirtín or someone could jump on and say there’s no way we can turn him (Mr Bryson) away (from giving his evidence to the finance committee), this is credible, relevant and in the public interest.”

This prompted Ulster Unionist Party and Alliance politicians to call on Mr Ó Muilleoir to step aside until the Stormont Commissioner on Standards has investigated the overall claims. Mr Ó Muilleoir rejected these calls.

Later on Tuesday Mr Ó Muilleoir repeated that he would not be stepping aside as Minister of Finance. “There is no basis for me to step aside as finance Minister and I have no absolutely intention of doing so,” he said.

On Tuesday ahead of the finance committee meeting the Sinn Féin Deputy First Minister Martin McGuinness said “Máirtín Ó Muilleoir has my full confidence and support as finance Minister”.

“Calls for him to stand aside are ridiculous and are nothing more than petty party politicking,” he said.

But at the committee meeting its DUP chairwoman Emma Pengelly increased the pressure on Mr Ó Muilleoir, leading calls for him to stand aside. Committee members such as Jim Wells of the DUP, Gerry Mullan of the SDLP, Philip Smith of the Ulster Unionist Party, and Jim Allister, leader of the Traditional Unionist Voice party, supported that demand.

Mr Wells said he found it “unbelievable and inconceivable” that Mr Ó Muilleoir - who was a member of the finance committee when Mr Bryson made his claims to that committee last September - was “unaware of what (Mr McKay) was up to”.

He said the issue regarding Mr Ó Muilleoir reminded him of key questions asked of President Nixon during the Watergate scandal: “The question is what did he know and when did he know it?”

Ms Ruane said it was important that the committee did not do anything that would interfere with the more general claims of financial impropriety in relation to the purchase of the Nama property portfolio, or that would jeopardise the inquiry by the Commissioner for Standards with which Sinn Féin would “actively cooperate”.

She would not support the call for Mr Ó Muilleoir to resign as he had “done nothing wrong” and he “was very open and accountable” in relation to the allegations against Mr McKay and Mr O’Hara.

The committee members, with the exception of Ms Ruane, agreed that it would write to Mr Ó Muilleoir calling on him to stand down pending the outcome of the official Commissioner for Standards inquiry into the “coaching” claims, and that it would also ask him to appear before the committee to answer questions about the alleged conspiracy against Mr Robinson.