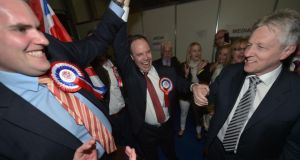 The DUP deputy leader Nigel Dodds, with the benefit of the DUP-Ulster Unionist Party pact, was elected comfortably in North Belfast, despite attempts by Sinn Féin to rally nationalists in the constituency.

There was a Sinn Féin conviction that regardless of the pact those nationalists could be galvanised into coming out in sufficient numbers to oust Mr Dodds.

This was exemplified by a Sinn Féin leaflet pointing out that in the constituency there were now more Catholics than Protestants in the area. But Sinn Féin strategists must now wonder was that move counter-productive. It led to SDLP and unionist politicians accusing Mr Kelly and Sinn Féin of sectarianism, with even some Sinn Féin supporters aghast that the party would bring religion so publicly into the mix.

To jubilant supporters, Mr Dodds thanked the unionists who supported him and also those “from areas not regarded as solidly unionist” who he said also voted for him. He then stuck the knife into Sinn Féin over the leaflet while also making clear that the sectarian allegation would not be forgotten.

“This is one of the nastiest campaigns that I have been involved in,” he said. Mr Dodds said the DUP had proved that “truth triumphs over lies”.

And he added, “We have exposed the sectarianism of Sinn Féin for what it is. And that is very useful in going forward in the political process. “We have also exposed the bogus nature of the so-called equality agenda which is about, according to Sinn Féin, breaking the unionist b......s.”