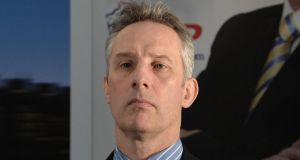 Following his victory in the constituency, DUP MP Ian Paisley Jr admitted it was “unusual” to have fought an election without his father at his side, but he said he felt he just had to get on with the job of keeping the North Antrim parliamentary seat in the family.

As he was cheered by supporters at Ballymena’s Seven Towers Leisure Centre in the early hours , Mr Paisley said he was dedicating the success to his mother Eileen and wife Fiona.

He said his mother had come through a “difficult” time following the death of her husband last year.

After the vote, Mr Paisley spoke on what it was like not to have his father present for his return to parliament.

Mr Paisley said: “I think anyone who loses a parent, especially one they were very close to, knows there is a gap there you can never fill, but I think what you do is you take away from that all the lessons you have learned about life, and I have tried to take those lessons and build from them.

“It is unusual not to have him on the campaign, but it is also a measure of a person that you have to go on and get on with the job.”

Mr Paisley explained why he dedicated the victory to his mother Eileen and wife Fiona: “If you recall back in 2010 I dedicated that victory [to my father] and [Ian Paisley Sr] was standing in front of me and smiling up at me with such pride, so I think I already had that box well and truly ticked.”

He said: “At a time of significant national uncertainty, it could be Ulster’s members of parliament who may have a say in not only who enters Downing Street, but in the direction and policies of the incoming government.

“Tonight’s victory for me potentially puts the Democratic Unionist Party centre-stage nationally, and offers Unionists from Ulster for the first time in 100-years a real say in the affairs of the United Kingdom. ”

Timothy Gaston of the Traditional Unionist Voice (TUV) came second in North Antrim with 6,561 votes. He said he thought it was “very credible” that he had held the TUV council vote from last year, “when [party leader Jim Allister] hasn’t been on the ballot paper”.

“So, looking forward to going into 2016, the TUV has shown we have a solid base in North Antrim and I believe that will grow in the future.

“Overall, Ian Paisley’s majority is down and our vote is slightly down, but five years ago that was Jim Allister running.”

Over 830,000 patients now on hospital waiting lists 18:08
Special school pupils to return on alternate days from Thursday 17:57
Remote working: ‘I do find myself wondering how I did the commute’ 17:55
PSNI treating fire at Belfast multicultural centre as hate crime 17:51
Coronavirus: 50 further deaths and 3,498 more cases confirmed 17:42