Minister acknowledges numbers more than 1,000 below the 9,500 minimum target 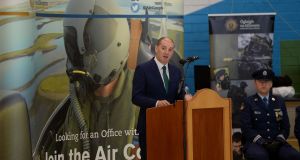 Minister of State for Defence Paul Kehote was speaking during a Dáil debate on the impact of Covid-19. File photograph: Alan Betson

No ex-military personnel have rejoined the Defence Forces since a reenlistment scheme opened 10 weeks ago, the Dáil has heard.

Minister for Defence Paul Kehoe confirmed that “none as of yet” had been recruited but he said “the Chief of Staff will recommend to me next week a number of people to come in”.

Cathal Berry, a former Army Ranger who is now a Kildare South TD, raised the issue. He said that since the Defence Forces scheme was announced in late March, the HSE had recruited more than 1,200 personnel and the Department of Social Protection was making payments to more than a million people.

However, he said not a single person was back working in the Defence Forces under the scheme.

Mr Kehoe told him that more than 600 had applied to rejoin and “a huge amount of work is ongoing” on the issue. Dr Berry said “the number is zero” for personnel actually recruited.

The Dáil also heard that the two Naval vessels in Cork had not been in service for the past 12 months because of lack of personnel. Dr Berry said it was “exclusively because of a lack of sailors”.

The Minister said there were “particular challenges within the Naval Service”, which with 898 personnel was 200 short of its target strength.

He said the next government will “have to take a serious look” at the issue and that the service “will have to get special attention because we have to make the Naval Service an attractive organisation to join”.

The exchanges occurred during a debate on the impact of Covid-19 on the Defence Forces and their role in assisting the State during the pandemic.

The Dáil heard that the induction of 160 new recruits to the Defence Forces had been postponed because of Covid-19 and that numbers remain more than 1,000 below the 9,500 minimum target.

Mr Kehoe acknowledged the current 8,485 strength was “lower than planned” but that the current 2,994 general service recruitment applications were above expectations at this stage in the year.

He faced Opposition criticism over the delay and lack of clarity about the rotations of troops on overseas missions in Lebanon and the delay in return of two personnel from the Democratic Republic of Congo.

The UN delayed rotations of personnel because of the pandemic but Irish rotations have since been completed and two personnel serving in the Congo returned at the weekend.

Fianna Fail TD Robert Troy told the Minister it was because of a “lack of clear information coming from you that the misinformation was circulated”.

The Minister said that when a large number of personnel were involved there would be leaks and misinformation. But he said he was “very clear” that he did not want to “go back to the families” until he had a “specific date” for the return of personnel.

Fianna Fáil defence spokesman Jack Chambers said poor pay and conditions continued to overshadow many aspects of the Defence Forces “who remain the worst paid public servants. So it is no surprise to see such a recruitment and retention crisis.”

He said that 50 per cent of Defence Force projects were behind schedule as he questioned who was in charge of dealing with the implementation plan on recruitment and retention of personnel.

Sinn Féin spokesman Aengus Ó Snodaigh asked the Minister “do you accept any responsibility for having the Defence Forces under strength, ill-resourced and badly paid which has impacted on their ability to fully deliver for the State in relation to the Covid-19 response”.

He also asked if personnel in future rotations to Lebanon which may be for four rather than six months would receive allowances for the full six months.

Mr Kehoe said he was involved in discussions with the Department of Public Expenditure and Reform on this and was seeking clarity.

The Minister also stressed that they continued to deliver over €20 million in a package of measures in increases in Defence Forces’ pay with increases in new entrants pay.

Outlining the role of the Defence Forces in assisting the State during the pandemic Mr Kehoe in the two months to the end of May there had been 21,000 troop call outs with an average of 446 personnel on standby every day.

They helped the HSE with contact tracing, engineering support with the fit out of temporary facilities for HSE including Citywest. They are operating the new testing centre in the Aviva stadium and marshalled at HSE testing sites around the country. Personnel transported tests to Germany, collected personal protective equipment from more than 150 cargo flights and stored and distributed it.