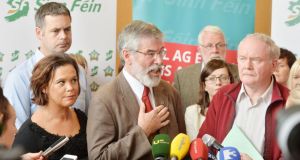 The City North Hotel is the one you pass on the M1 motorway near the toll bridge south of Drogheda. It seems to be plonked in the middle of nowhere.

If you were looking for a hotel that could serve as a metaphor for Sinn Féin, it is near enough to perfect. Despite its description it is not a city hotel.

It is neither Belfast nor Dublin, a kind of a half-way house. And then when you go inside you find that, despite its relative isolation, it is busier and more active than you would expect.

It is in this outlier of a hotel that Sinn Féin was holding its party think-in yesterday.

Last week Renua bucked convention and opened its doors to the media. Fat chance that will happen with other parties, especially Sinn Féin.

What reporters got was an extended doorstep interview and a chance to listen to Sinn Féin president Gerry Adams deliver his speech to the councillors, TDs, Senators and northern representatives that made up his faithful audience.

Afterwards the sessions were closed. The media was told there would be arguments and debate. Even the latest Apple OS can not synch its messages as quickly.

The “think-in” is primarily focused on Oireachtas politics and the upcoming general election.

As Adams addressed the media, Mary Lou McDonald stood patiently and serenely to the right of him.

Her situation reminds one a little of a remark made by Eamon de Valera in the 1930s about another party: “Labour must wait.”

Large though the gathering was, it was still the Gerry and Martin show, as it has been for over 30 years.

At one stage, a reporter suggested P O’Neill might be revived to confirm the IRA is no more.

When he was asked when he himself might be, erm, decommissioned after over three decades as leader, McGuinness interjected.

“He’s younger than the Pope,” the Derry man exclaimed, as they walked away together.

Which Pope did he mean, the media wondered afterwards. Because some of them kept going into their 80s.