As Sinn Fein welcomes its first new president in over 30 years party members look at where the party now falls on the left-right political divide. 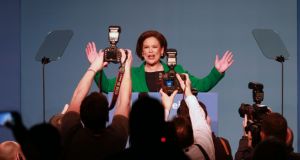 Sinn Féin TDs will not be allowed a conscience vote on abortion and anyone who deviates from the party line will be disciplined, the party’s new leader Mary Lou McDonald has said.

“It’s a matter of private conscience but it’s also a matter of public policy,” Ms McDonald told RTÉ’s The Week in Politics on Sunday.

If not, she said, they will be subject to disciplinary action by the party.

However, Ms McDonald’s own views on abortion are in conflict with current party policy. She said she supported the findings of the Oireachtas committee, which recommended the legalisation of abortion up to 12 weeks in pregnancy.

Sinn Féin policy favours repeal of the Eighth amendment and the legalisation of abortion in cases of rape, fatal foetal abnormality and where a woman’s mental or physical health is under serious threat by the continuation of the pregnancy.

However, party policy is opposed to abortion on request without reason.

Ms McDonald said “the party is not in policy terms in line with that at the moment”, but said a policy paper was “close to completion” which may lead to a change in the party’s policy.

Any change would have to be endorsed by an ard fheis though most changes in policy which are recommended by the party leadership tend to adopted by the membership.

Asked about a spate of bullying allegations in the party which has led to the resignation of a number of councillors and members, Ms McDonald said she had launched two initiatives, one directed at councillors and another “a very deep dialogue with our grassroots base”.

On the North, Ms McDonald said there wasn’t “anything insurmountable” in the talks between Sinn Féin and the DUP to restore the Northern Ireland Assembly and said she believed “a deal is possible”.

However, added there was as yet “no finished deal on the table.”

“We are now at a decisive phase, this can’t go on and on and on,” she said.

Ms McDonald strongly rejected suggestions that there were others in the background controlling her leadership. Such commentary, she said, “verges on being insulting to me.”

“Is this puppetry commentary something reserved for women in political leadership?” she asked.

She also said she hoped Sinn Fein’s message under her would “resonate with the middle classes”.