Martha Pope, frustrated by slow progress of peace talks, said people were ‘out to get her’ 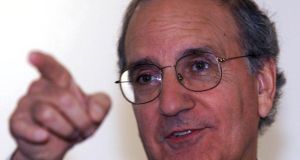 Former US senator George Mitchell was chairman of the peace talks, with Martha Pope as his senior aide. Photograph: Peter Morrison/AP

A US diplomat disillusioned by the slow progress in the peace talks in 1997 said Northern Ireland was “awash with money” for special interest groups and community organisations and suggested this could be a reason for many not wanting to change the “status quo”.

Martha Pope, who was a senior aide to the peace talks chairman George Mitchell, told a British diplomat in Washington of her frustration with the political situation in Northern Ireland prior to the Belfast Agreement and said there were people there “out to get her”.

A memo released by the British government’s National Archives from Peter Westmacott, then the British embassy’s counsellor for political and public affairs, said Pope was not looking forward to her return to Belfast.

“She had become increasingly disillusioned with the political leadership there – with the notable exception of the loyalists and, to a lesser extent, the Women’s Coalition. She thought it unfortunate that the political structures in Northern Ireland allowed the politicians to behave irresponsibly, knowing that the British government would pick up the tab and they would not have to face the consequences of their actions,” said the memo.

“The place seemed to be awash with money; every special interest group, community organisation – even parts of the Government machine – seemed to have unlimited funds at its disposal. Perhaps there were just too many people with a vested interest in the status quo?”

Pope received an honorary degree from the University of Ulster last year in recognition of her work on the peace talks, which led to the Belfast Agreement, also known as the Good Friday agreement. The 1997 meeting came shortly after a false claim was published in the press that she had been having an affair with Sinn Féin’s Gerry Kelly.

The Sunday World and the Mail on Sunday, which had cited MI5 as the claim’s source, later apologised for the false allegations.

A month after the story had been published, Pope told Westmacott that she was convinced there were “those in Belfast who had been out to get her”. “Clearly enjoying the decompression of being away from the Europa Hotel for a couple of weeks, Pope was not greatly looking forward to her return to Belfast,” he wrote.

At the time, Mitchell was resigned to the talks not producing more in the way of results and had been undecided about how long he would stay in the job, bringing about suggestions of who would replace him. “She would be happy to stay on, for a while, as chief of staff to the new chairman, provided she was not regarded by the parties, or either of the two governments, as damaged goods,” wrote Westmacott.