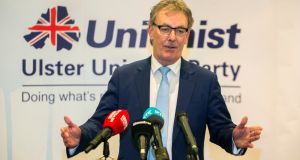 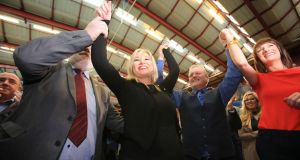 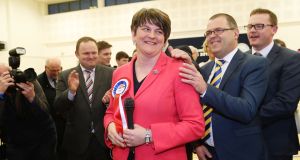 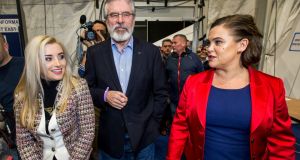 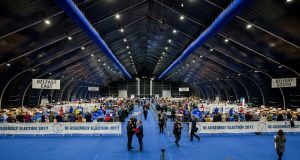 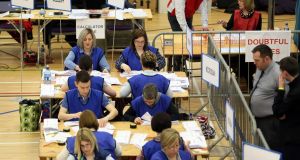 Ballots for the Northern Ireland Assembly elections are counted by staff at the count centre in Omagh, Co Tyrone. Photograph: Paul Faith/AFP/Getty Images 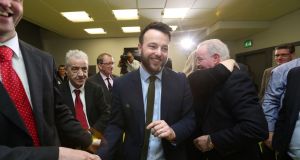 Sinn Féin has emerged as the biggest winner in the North’s Assembly election after the party came to within one seat of matching the Democratic Unionist return of 28 seats.

In a dramatic shake-up, unionists lost their long-enduring and highly symbolic overall majority in Stormont as the republican party came very close to securing more first preference votes than the DUP.

Former first minister Arlene Foster is now likely to come under intense scrutiny after her party fell below the threshold of 30 MLAs required to trigger a contentious Stormont veto mechanism called the “petition of concern”.

The mechanism effectively handed the DUP a veto on issues including moves to lift the ban on same-sex marriage in Northern Ireland.

“The vote has increased. I think that is because people knew that action needed to be taken, they have had their say, we now need to get down to the business of fixing what’s wrong and delivering for all citizens.”

With the final seat filled after 3am on Saturday, the DUP finished with 28 seats, Sinn Féin has 27 seats, SDLP 12 seats, UUP 10 and Alliance 8.

With the UUP failing to make any ground on the DUP, and losing a number of high-profile seats, the party leader and former TV news anchor Mike Nesbitt resigned after his party failed to make a breakthrough in the election.

His campaign pledge to transfer a second preference vote to the nationalist SDLP appears to have been his undoing, with unionist voters clearly not keen on him voicing support for any candidate that favoured a united Ireland.

He said he will stay in the position until a successor is found.

Mr Nesbitt said the electorate had rejected his hope for a post-sectarian vote.

“We will get there,” he said. “Some day Northern Ireland will vote as a normal democracy.”

Other high profile losses include four former Executive ministers - the SDLP’s Alex Attwood, the UUP’s Danny Kennedy, and the DUP’s Nelson McCausland and Lord Morrow - each failed to secure a return to a Stormont legislature that is being cut from 108 to 90 members.

After the first counts were completed on Friday, it was revealed that Sinn Féin came within touching distance of polling the most first preference votes in the election.

The DUP maintained the top spot, despite their vote share falling, as the Sinn Féin share surged.

In terms of the overall picture, the DUP secured 28.06 per cent of first preferences to Sinn Fein’s 27.91 per cent.

The UUP and the nationalist SDLP failed to make the inroads they predicted.

However, the vote share of the cross-community Alliance Party rose significantly.

As the results came in, DUP leader Arlene Foster and Sinn Féin president Gerry Adams called for stakeholders in Northern politics to respect the mandates their parties had been given by the electorate.

Arriving at the Belfast count centre on Friday, Mr Adams said: “It is a vote and mandate that will have to be respected by the two governments [British and Irish], by all the other parties . . . for an end to the old status quo, for a new beginning as to how we do our business here.”

He also said the results were a vote of confidence in his party’s position on Brexit.

Sinn Féin had called for Northern Ireland to receive a special designated status within the EU after the UK’s exit from the bloc.

“It is a vote for Irish unity, a vote for us together as a people,” said Mr Adams.

Speaking to The Irish Times, Mr Adams also criticised the DUP’s behaviour in the last government.

“They lost the run of themselves . . . They got themselves in a little bubble. That bubble has been punctured by Martin McGuinness and by others.”

He also suggested that the DUP nominate someone other than Ms Foster to act as the unionist leader in the next Executive.

Speaking following her election at the Omagh count centre, Ms Foster said Sinn Féin must respect the mandate “that has been given to me”.

“I think it’s very clear that [the election] was absolutely not about the RHI [renewable heat incentive], it may have been the excuse but it certainly wasn’t the cause of the election.

“The cause of the election was Sinn Féin and republicanism wanting to rerun the election . . . they have mobilised their vote in a very effective way.”

Ms Foster said she was pleased that the DUP had “come out as the largest party in terms of votes.

“It is very clear in terms of unionism that it is the DUP that speaks for unionism.”

Turnout jumped to 65 per cent from the last election, the highest level since the first Assembly election immediately after the 1998 Good Friday Agreement.

The number taking to the ballot boxes on Thursday was 10 per cent higher than last year’s Stormont poll, and a total of 812,783 votes were cast.

The SDLP’s Justin McNulty, who was elected on the second count in Newry and Armagh, attributed the strong nationalist vote to the “Arlene factor”.

“Her dismissive remarks had people out in droves. There was almost a carnival atmosphere in polling stations, with people determined to make a difference.”

“The Sinn Féin vote has gone up very highly, which is a result of the overall context of this election, which has been pitched as a battle between the DUP and Sinn Féin,” he said. “Those of us in the middle have been clearly squeezed.”

Sinn Féin topped the polls in many constituencies, including in Foyle.

Sinn Féin’s Órlaithí Flynn was the first candidate over the line in the election, topping the poll in the republican heartland of Belfast West.

Soon after, Ms O’Neill topped the poll in Mid-Ulster and strolled through on the first count.

Ms Foster topped the poll in Fermanagh and South Tyrone, but fell short of the quota required for election on the first count.

Alliance Party leader Naomi Long topped the poll and was elected on the first count in Belfast East, with 7,610 votes

It will be the first time the SDLP will have no representation in the nationalist constituency since Stormont’s foundation.

Mr Attwood said he was disappointed but “not extravagantly deflated” with losing his seat. “I’m much more worried about where the country is going,” he told Radio Ulster.

In another shock, UUP stalwart Danny Kennedy lost his seat in Newry and Armagh, after being an MLA after nearly 20 years.

The former deputy UUP leader said it is unlikely that he will remain in politics following the defeat.

The snap Stormont Assembly election was called following the collapse of the ministerial coalition between the DUP and Sinn Féin in January in a row over the botched RHI green energy scheme.

Soaring viewing figures for the two main TV leaders’ debates had hinted at a surge in voter engagement in this election, something borne out on polling day.

With the DUP and Sinn Féin again returned as the main players in government, they will have three weeks to resolve their multiple differences and form a new administration.

The reimposition of direct rule from London is on the cards if the post-election talks fail.

If the three-week post-election deadline for forming a government passes, Northern Ireland Secretary James Brokenshire is legally obliged to call yet another election.

However, in those circumstances, the British government may pass emergency legislation to suspend devolution for the first time in 10 years, ahead of more lengthy negotiations.