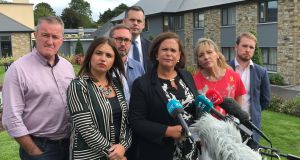 Three critical events relating to Irish politics will occur over the next two months: the budget; the renegotiation of the confidence-and-supply agreement; and the October deadline for UK’s divorce deal on Brexit.

It might not be enough to set the pulse racing but you would expect at the very least, to hear the distant sound of war drums.

But when you looked around the room of the Sinn Féin pre-Dáil meeting in Cavan yesterday, it quickly became clear that no status orange warning has yet been issued for this party, or for any other party.

You will find as the parties do the rounds of their September “think-ins” that the mood will be a mid-term relaxed one. No one believes the Government is going to fall on the budget. Just about everybody believes that the confidence-and-supply agreement between Fine Gael and Fianna Fáil will be extended for another year, and possibly two. And the view emerging from politicians is that Brexit will require a certain amount of unity and coherence and pulling on the national jersey. And that means no prospect of a general election.

That scenario probably suits Sinn Féin as much as it does the other two big parties. None of the three feel comfortable with an early election – you get the sense from all of them that the more time they have, the more they can gain in a general election. It would be hard to see all three sharing the spoils of other (smaller) parties but each see a longer run-in as advantageous.

Sinn Féin has a new leader. And the new leader has a new dispensation, to pivot the party more to the South, and to mainstream it in a sense that the party can be seen as responsible, as trusted and responsible, with the prospect of attracting voters who just couldn’t bring themselves to vote Sinn Féin under Gerry Adams’ stewardship.

For now, new party leader Mary Lou McDonald is an asset and the party believes she can give it electoral bounce whenever a general election is held.

Certainly, her first address as leader at this meeting illustrated that new dispensation. It was an exercise in brevity and clarity: a short punchy speech that focused very much on the big issues in domestic southern politics – namely homelessness, marginalisation and rural depopulation.

Adams was a politician of big ideas and big visions and was never comfortable debating the bread and butter issues, the staple of political discourse in Leinster House. In contrast, McDonald is in her element with these – the two takeaways from her speech yesterday was her attack on Eoghan Murphy as she outlined plans to table a no-confidence motion, as well as a promise to put down another motion to stop the planned closure of 159 post offices. There are few stronger parliamentary combatants.

That said, there is no corollary on that for her northern outlook or for the republican vision thing. McDonald is the leader of an all-Ireland party and the party’s big preoccupations, many driven by Adams, remain the same: on a Border poll, on equality in the North, on a language act, on the impact of Brexit and the never-ending suspension of Stormont.

At the heel of the hunt, the party needed a southern leader at this stage of its history and it will be the party’s status in the South that will ultimately determine how successful a leader McDonald will be. The party will announce a presidential candidate on the 16th (it will be a major shock if it is not the impressive and personable Liadh Ní Riada). That is a smart move, allowing Sinn Féin a chance to build profile and trust in a field without Fine Gael and Fianna Fáil candidates.

Before McDonald became leader, Sinn Féin looked like it might tread water in the next general election, ending up with zero seat gain, or a gain of one. McDonald will be expected to bring the tally from 22 to closer to 30. It’s doable but no easy task – unless there is a dramatic turn of events.