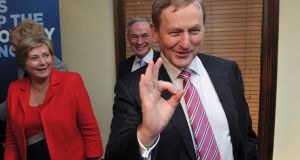 The first opinion poll of the general election campaign has brought disappointing news for the Coalition parties with Fine Gael losing ground and Labour remaining static.

The results of the latest Irish Times/Ipsos MRBI poll show Fine Gael down two points since the last poll at the end of November.

The combined vote of the Coalition parties is well below the level required to be sure of winning a second successive term in office when voters go to the polls on Friday, February 26th.

The date for the general election was confirmed by Taoiseach Enda Kenny on Twitter after he told TDs he was asking President Michael D Higgins to dissolve the Dáil.

The new Dáil is due to meet on Thursday, March 10th.

The poll contains good news for Fianna Fáil with the party gaining on Fine Gael and pulling ahead of Sinn Féin in the vital days before the Dáil was finally dissolved.

There is also good news for Independents and smaller parties who have gained support as the election has neared.

The survey was conducted on Monday and Tuesday of this week among a representative sample of 1,200 voters aged 18 and over in face-to-face interviews at 100 sampling points in all constituencies.

The strong showing by Independents and smaller parties is one of the main features of this first poll of the general election.

It indicates that they are still on course for a record result on election day.

Voters who said they would vote for Independents/Others were given a range of options to choose from.

This was followed by the Anti-Austerity Alliance/People Before Profit with 4 per cent; the Shane Ross-led Independent group had 3 per cent.

When it came to satisfaction ratings there was a decline of 2 per cent for the Government with party leaders Enda Kenny, Micheál Martin and Gerry Adams also slipping.

The only party leader to make a small improvement was Joan Burton.

The poll findings will be worrying for Fine Gael.

After hitting 30 per cent in November the party has slipped back to 28 per cent.

It will need a very strong performance in the election campaign to gain the support required to win a second successive term.

The party’s vote in Dublin has slipped significantly since the last poll and it will struggle to hold all its seats in the capital.

The news for the Labour Party is no better. It has not moved off the 7 per cent figure it has received in three of the four Irish Times polls conducted during 2015 and time is running out for a recovery before polling day.

The opposite is the case for Fianna Fáil with the party moving up at precisely the right time in the week the election was called.

At 21 per cent the party is significantly up on its disastrous performance in the last general election and is in with a good chance of achieving its target of 35-40 seats in the election.

The two-point slide in Sinn Féin support will be disappointing for the party but if the 19 per cent poll support translates into votes on election-day it will deliver a big increase in seats for the party.

The increase of two points in support for Independents and smaller parties to 25 per cent indicates that the next Dáil could well have the biggest number of Independents in the history of the state.

* February 4th, 2016: This article was amended to correct an error in the figures for the change in core vote for Labour and Independents