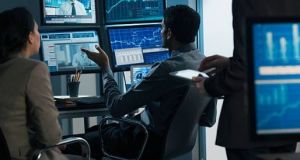 There will be a civil Bill aimed at strengthening the oversight and governance of corporations and executives.

Banks and other financial institutions are to face a stricter monitoring regime as part of a series of initiatives to tackle white collar crime and corruption.

The measures, to be announced this week will see the Office of the Director of Corporate Enforcement (ODCE) being effectively disbanded.

The office was was severely criticised for its work in bringing the failed prosecution of former Anglo Irish Bank chairman Seán FitzPatrick.

The measures includes two new Bills providing for quicker and more effective prosecutions in corruption and bribery cases. There will also be a civil Bill aimed at strengthening the oversight and governance of corporations and executives.

The move is a joint initiative involving four Government departments and will be launched by Tánaiste and Minister for Enterprise Frances Fitzgerald on Thursday. The departments of finance, justice, and the Taoiseach are also involved.

While the package was already in development as details of the tracker mortgage scandal emerged, Government sources said some of the measures should have a direct bearing on such practices, ensuring they could not happen again.

Under the plan the ODCE, the State’s corporate compliance watchdog, will effectively be disbanded and replaced with a new white collar criminal investigation agency.

The changes at the ODCE have been on the cards since Mr FitzPatrick was acquitted on all charges last May after the longest criminal trial in Irish legal history. He had faced 27 charges under the Companies Act including misleading auditors of the failed bank as well as furnishing false information.

The ODCE was severely criticised by the trial judge for producing evidence that fell far short of its duty. Ms Fitzgerald later described it as “not fit for purpose” and an internal Government review conducted by Government after the debacle recommended its replacement.

Taoiseach Leo Varadkar sent a letter to Ms Fitzgerald and Minister for Justice Charlie Flanagan in June requesting a new package that would enable the State deal effectively and quickly with corruption cases and white collar crime.

Among the measures he suggested was to explore the possibility of providing immunity to those found to have committed corrupt acts if they were prepared to become whistleblowers against bigger players in the crime.

He also suggested the creation of units in the Garda and the office of the Director of Public Prosecutions that would be dedicated to investigating corporate crime. Mr Varadkar also proposed that evidence rules be changed including that computer records be permitted for use as evidence.

At least some of these measures will be incorporated into the package but the proposed changes to the Garda will not be introduced as a result of separate reforms being conducted in the force.

The main legislative element will be the Criminal Justice (Corruption) Bill 2017 which widens the definition of corrupt acts and bribery in the public sector. It provides for passive acts (such as knowingly ignoring a bribe) as well as bribing foreign officials. It is hoped that second piece of legislation, the Criminal Procedure Bill, will help to speed up the legal process for corruption cases, as well as changing evidential rules

A third Bill will be brought forward by the Department of Enterprise. The Companies (Statutory Audits) Bill will broaden powers for supervision and monitoring of auditors and accountants. Auditors of the main banks were heavily criticised for failing to raise flags ahead of the banking collapse.