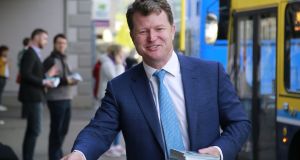 Malcolm Byrne of Fianna Fáil: he says he has faced much social media abuse, not just about his sexuality but on other issues too. Photograph: Nick Bradshaw

Elected a county councillor in 2009, he was mayor from 2014 to 2015. A native of Gorey, where he attended school at Loreto and Christian Brothers, he studied law at UCD where he got involved in student politics.

Now aged 45, he was elected education officer for both UCD and the Union of Students in Ireland (USI) before beginning an eclectic career that started with Chambers of Commerce Ireland.

He then became the first commercial manager with myhome.ie before going on to serve a stint as chief executive of the Community Games.

After that he became executive director of Screen Producers Ireland, before moving to his current position as head of communications with the Higher Education Authority in Dublin, where he has worked for the past 12 years, commuting from Gorey.

He will seek leave of absence from the authority because a general election is expected within the next six months.

As a gay man he says he has faced much social media abuse, not just about his sexuality but on other issues too. “I’m used to getting abuse online so it doesn’t bother me anymore.”

He spoke out against racism and hate speech after his Dáil win, and believes that politics is a “noble” profession. “We can disagree about ideas, but we should do it in a respectful way.”

Deeply involved in drama, musicals and theatre in Co Wexford, he also completed his 30th marathon in Dublin this year. He is known for travel to unusual places, including most recently North Korea and Greenland.