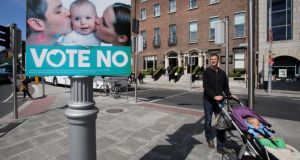 A campaign poster in Dublin encouraging voters to vote No to same-sex marriage ahead of the referendum on the issue. Photograph: Paul Faith/AFP/Getty Images

Almost 66,000 voters have been added to the electoral register ahead of the same-sex marriage referendum on Friday, the Department of the Environment has confirmed.

A late surge in applications for the supplementary register took place across the State ahead of the May 5th deadline, with 65,911 names included in the valid electorate.

The Department of the Environment recorded a figure in February of 3,146,777 electors entitled to vote in the referendum.

When the number of potential voters on the supplementary register is included, the total is 3,212,688.

Taoiseach Enda Kenny welcomed the development by re-tweeting Yes Equality’s tweet: “WOW. Almost 66,000 people have been added to the supplementary register. Now we need everyone to vote YES on Friday.”

Minister for the Environment Alan Kelly said he was “heartened” by the large supplementary register figure, which he said represented an increase of 36 per cent on the numbers included in the supplement to the register in advance of the last referendums held.

These were held on the abolition of the Seanad and the establishment of a Court of Appeal in October 2013.

“I hope that the electorate will now back up the time and effort they have taken to get included in the supplement by coming out to vote in the referendums on Friday,” he said.

“The hallmark of a democratic society is the right to vote. The exercise of that right is a privilege, and I encourage all registered electors to have their say next Friday on these important issues.”

According to Yes Equality, almost 27,000 voters joined the supplementary register in Dublin City and County.

The group’s spokesman Brian Sheehan said he was delighted with the figures, which he described as “phenomenal”.

“In the final days of the campaign, Yes Equality would like to ask all those newly registered voters, along with all other voters, to do one more thing – to cast their ballot for Yes next Friday,” he said.

“We would also like them to plan how they will vote at www.getmetothevoteontime.com.”

Iona Institute Director David Quinn, who is advocating a No vote, said the Yes side had run a bigger registration campaign and had been very visible, especially on university campuses.

Reacting to the figures on the supplementary register, he said: “I would say the bulk of them are Yes voters but some are going to be No voters, particularly from immigrant groups and the new Irish, many of whom would be voting No.”

Mr Quinn said he was referring to African and Muslim communities in particular.

However, he said he would not hazard a guess as to the figures involved.