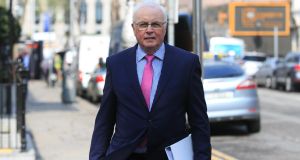 Frank Daly, chairman of Nama: “Nama has a commercial remit and its objective must be to get the best financial return for the State.’’ Photograph: Gareth Chaney Collins

The National Asset Management Agency (Nama) will eventually yield a surplus of more than €2 billion to the exchequer, its chairman Frank Daly has said.

“Quite obviously it is a matter for government at the time to decide what they do with that,’’ he told the Oireachtas Committee on Housing and Homelessness.

Mr Daly said while the legislation setting up Nama had referred to a social dividend, it was clear the main purpose was its contribution to dealing with the State’s economic difficulties.

“Nama has a commercial remit and its objective must be to get the best financial return for the State,’’ he added.

One of the issues driving Nama, he said, was its belief that the debt, whether it be the €32 billion it started off with or the €7 billion senior debt which was there now, represented a contingent liability on the State.

This impacted in the greater sense on the State’s standing in the markets and its capacity to borrow, he said.

Mr Daly said, in total, Nama had facilitated more than 11,000 buyers, families, couples and individuals, who had bought homes from its debtors or receivers.

He said 88 per cent of the homes acquired from the Nama portfolio for the past five years had been bought by individual buyers in individual transactions.

“And this is contrary to the perceived wisdom that Nama has sold most of its residential portfolio to so-called vulture funds,’’ he said.

Mr Daly rejected a suggestion from Independent TD Mick Wallace that Nama might be under the direction of Minister for Finance Michael Noonan.

Mr Daly said Nama was independent and operated its mandate according to the Act which set it up.

He said Mr Noonan would sometimes come along to a meeting reviewing strategy and engage with the board.

Nama chief executive Brendan McDonagh said the claim the agency was holding land was a myth, adding developers were retaining sites to seek a higher return.