Nama to become subject to Freedom of Information 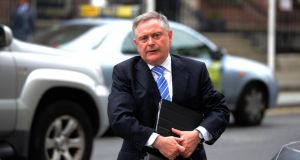 The National Asset Management Agency (Nama) is one of a number of high-profile public bodies that will become subject to Freedom of Information (FoI) for the first time.

A new FoI Bill due to be published early next week will apply to the body that administers third-level grants, Student Universal Support Ireland (Susi), and Education and Training Boards subject to a restriction on records which would enable school league tables to be compiled.

The Central Bank will also be brought under the legislation. The European Central Bank (ECB) secured amendments to the proposed Bill and records that are subject to professional secrecy obligations under EU law will be exempt.

Minister for Public Expenditure and Reform Brendan Howlin said he expected the Bill would be enacted in the autumn. The National Treasury Management Agency (NTMA) and the National Pension Reserve Fund (NPRF) will come under the remit of the legislation for the first time.

Along with Nama, their inclusion will be subject to the “maintenance of strict confidentiality of their engagement with commercial counterparties, for example in securing external private finance for the State”.

The absolute exemption for records relating to the tactics, strategy or operations of the Defence Forces and certain diplomatic communications will be removed and made subject to a “harm test”.

Mr Howlin will be considering options for changes to the search and retrieval fees regime. Among the options is a cap on such fees, which are generally charged at around €20 an hour.

The upfront application fee of €15 per non-personal request will be retained but the charge for an appeal will be reduced from €150 to €50 and the cost of initiating an internal review process will go down from €75 to €30.

Records including Cabinet papers from as recently as April 2008 will become accessible for the first time, meaning documents relating to the controversial bank guarantee which was implemented in September of that year are likely to be sought.

Mr Howlin said the Bill sought to ensure Ireland’s FOI regime was restored to the “top tier of legal frameworks internationally for facilitating access to official information”. He added: “The Bill will substantially restore the legislation and extend it to almost all public bodies, as well as consolidating and modernising it to improve the functioning of the Act and to improve the structure of the legislative framework.”

The Fine Gael/Labour programme for government claimed the previous Fianna Fáil-led administration had “undermined” the FoI legislation and committed the Coalition to restoring the law to its pre-2003 status.