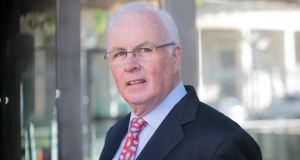 The chairman of the National Asset Management Agency has expressed concern that there may be an agenda to stop the organisation in its tracks.

Frank Daly yesterday questioned the source of allegations of wrongdoing directed at the work of Nama, which he said were without foundation.

“I do not agree that the bidding process had been corrupt,” he the Dáil’s Public Accounts Committee (PAC). “I absolutely stand over the integrity of the process and stand over the fact that the taxpayer got value for money.”

Asked if he knew the source of the allegations, Mr Daly replied that he did not want to seem paranoid.

However, he added: “I do sometimes wonder if there is an agenda out there to stop Nama in its tracks, to slow us down.

“Who benefits? It is not for me but for others to wonder if there is a campaign to stop Nama, to slow Nama down. Who would benefit? I know who won’t benefit, and that is the ordinary taxpayer.”

Mr Daly was questioned on allegations of wrongdoing in the sale of Nama’s Northern Ireland loan portfolio, dubbed Project Eagle, but he insisted Nama had no knowledge of any wrongful activity.

Mr Daly said allegations made by Independent TD Mick Wallace in the Dáil this week were a “serious misrepresentation of the facts”.

The Wexford TD has been to the forefront in raising concerns about the sale of the loan book of 800 properties in Northern Ireland, and the alleged payment of €45 million in “fixer

” fees to a number of individuals.

Mr Wallace also alleged that Cerberus or fixers offered to sell debtors back their loans for 50 pence on the pound.

Mr Daly said it stretched belief that any debtor would have had paid 50p for an asset that was worth only 27p. He said it was difficult for Nama to properly address allegations being made against it.

The committee heard that it had been claimed the sale of Project Eagle, which sold for £1.3 billion, could have generated up to £5 billion.

Mr Daly said there was no certainty that this “projected profit will be achieved ultimately, given the difficulty of predicting the performance of markets and of economies”.

He said “knowing what we know now about this portfolio”, Nama was not prepared to take the risk.

Mr Cushnahan left the committee and began worked as an adviser to US investment firm Pimco, one of the companies that wanted to buy Nama’s Northern Ireland loans. He is alleged to have been in line for payment if Pimco’s bid was successful. The firm later pulled out of the race.

Mr Daly confirmed he and Mr Cushnahan had worked on the board of a charity together but said he had not spoken to him since his departure from the board.

He insisted they had a professional relationship and he had no awareness of his involvement with Pimco until the bidder informed Nama.

Mr Daly told the committee that Mr Cushnahan had no access to confidential information and only had agendas of committee meetings.

Mr McDonagh said he had written to the Garda Commissioner on the day Mr Wallace made the allegations.

“I can assure the House that the alleged company that is supposed to have paid this money for exiting Nama is still in Nama.”