Garda Commissioner to appear before Oireachtas Committee on Justice 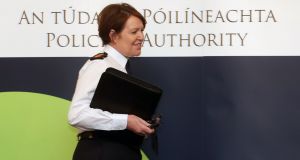 Garda Commissioner Nóirín O’Sullivan: “We are determined that anyone who brings forward issues or concerns will be listened to and supported.” Photograph: Laura Hutton/Collins

Garda Commissioner Nóirín O’Sullivan will today defend the force’s attitude to whistleblowers, insisting the force protects and supports them.

Ms O’Sullivan will appear before the Oireachtas Committee on Justice just days after a senior judge was appointed to investigate allegations of intimidation and harassment.

The commissioner will tell TDs she welcomes internal and external dissent and will say the force has learned from its mistakes.

“There will be a major focus on strengthening the governance of the organisation and enhancing risk management,” she will tell the committee.

“We are determined that anyone who brings forward issues or concerns will be listened to and supported.

One of the disclosures was made by Supt Dave Taylor, the former head of the Garda press office. He has said he was part of the campaign, but has insisted he was acting on orders.

Ms O’Sullivan will say An Garda Síochána is open to changing its policy on whistleblowers if necessary.

“An Garda Síochána is committed to real change and this has begun. But this major journey of renewal won’t be quick or easy – it is widely recognised that cultural change takes time. But change is happening.”

Ms O’Sullivan will also outline further operations between gardaí and the Spanish police to tackle gangland crime, as well as success in foiling 12 assassination attempts.