Nóirín O’Sullivan: ‘I did not promote my bridesmaid, I didn’t have one’

Garda Commissioner Nóirín O’Sullivan has denied claims of nepotism under her leadership of the Gardai, including claims relating to the roles of her husband and her “bridesmaid”, while under cross-examination at the Oireachtas Committee on Justice. 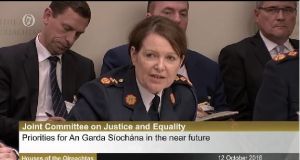 Garda Commissioner Nóirín O’Sullivan appeared before the committee just days after a senior judge was appointed to investigate allegations of intimidation and harassment of garda whistleblowers. Photograph: Oireachtas TV 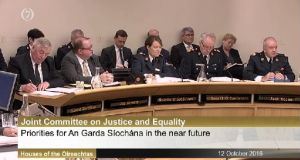 Garda Commissioner Nóirín O’Sullivan appeared before the committee just days after a senior judge was appointed to investigate allegations of intimidation and harassment of garda whistleblowers. Photograph: Oireachtas TV

Garda Commissioner Nóirín O’Sullivan has strongly denied claims of nepotism under her leadership of the force, including claims relating to the roles of her husband and her “bridesmaid”.

Under cross-examination at the Oireachtas Committee on Justice on Wednesday about the latest whistleblowing controversy to hit the force, Ms O’Sullivan was accused by Independents4Change TD Mick Wallace of promoting “your husband, your bridesmaid, you’ve surrounded yourself with your supporters rather than concentrate on promoting quality.”

She replied that “it isn’t the case I promoted my bridesmaid. I didn’t have a bridesmaid.”

She said there were factual inaccuracies in the public domain in relation to the gardaí.

Ms O’Sullivan previously came under scrutiny when it emerged that her husband Jim McGowan was promoted from Detective Superintendent to the rank of Chief Superintendent in 2015.

She defended herself against charges of favouring close friends and family, saying she is not personally responsible for individual promotions and that the process is “fair and impartial”.

Ms O’Sullivan also said it may be time to consider establishing an “independent entity” to deal with whistleblowing issues.

She told the committee that perhaps such a body would give people “some reassurance that there is somebody independently looking at these matters”.

Ms O’Sullivan appeared before the committee just days after a senior judge was appointed to investigate allegations of intimidation and harassment of garda whistleblowers.

The claims were made in protected disclosures to the Minister for Justice Frances Fitzgerald which allege that senior gardaí were instructed by management to undermine the professional and personal reputations of Garda whistleblowers, including Sgt Maurice McCabe.

Pressed about the claims before a parliamentary committee, Ms O’Sullivan repeatedly insisted she could not talk about any individual case.

But she said she had no part in any alleged conspiracy. “I’m personally not privy to, did not approve or condone any campaign against any individual,” she told the committee.

During a series of at times fraught exchanges with committee members on Wednesday morning, Ms O’Sullivan offered a robust defence of how whistleblowers are treated within the force and said An Garda Síochána is attempting to change its culture.

“From the outset, I have always made it clear that any employee has not only the right but the entitlement to come forward to raise any issue of concern, or any matters that they wish to bring to our attention,” she said.

The most fractious interactions occurred between the commissioner and Mr Wallace and Clare Daly, particularly over correspondence allegedly sent to Ms O’Sullivan outlining attempts to harass and intimidate a whistleblower.

“I’m aware that you were directly made aware. I have the correspondence and your replies in my folder here, in relation to allegations of precisely such a campaign of targeting in relation to whistleblowers,” said Ms Daly, a point that was strenuously denied by the commissioner.

Ms O’Sullivan said all she had heard was recent media commentary about certain protected disclosures, adding that she could not comment on individual cases that are currently under legal scrutiny.

Despite intense media coverage around protected disclosures made by former head of the Garda press office, Supt Dave Taylor, and Garda Keith Harrison, neither case was explicitly alluded to over the course of the two-hour meeting.

Ms O’Sullivan said that Mr Justice Iarfhlaith O’Neill will be given unhindered access to records and items in Garda possession as part of his inquiry into the treatment of whistleblowers, which will examine testimonies from Supt Taylor and Sgt Maurice McCabe.

Responding to one specific query from Sinn Féin TD Jonathan O’Brien, Ms O’Sullivan denied that whistleblowers are put under Garda surveillance or suffer harassment of any kind.

Ms O’Sullivan rejected a claim from Mr Wallace that one whistleblower told him the commissioner had personally “messed with our lives . . . and families”.

“I am not in the business, be it as Garda Commissioner or as Nóirín O’Sullivan, of messing with anyone’s lives. My business is about leading an organisation of men and women who are there to protect and support the community,” she responded.

She was further accused of painting a “pretty picture” of the force during her opening address to the committee, which she also denied.

“It’s not all pretty in the garden yet, nor did I suggest it was. We have a lot of work to do, we have some work done, but I can tell you it has taken some determination to get to where we are now,” said Ms O’Sullivan.

Ms O’Sullivan told Mr O’Brien that she was not aware of any secret meeting between former Garda commissioner Martin Callinan and Fianna Fáil TD John McGuinness, prior to hearing about it in the media.

In an update on threatened Garda strikes next month, senior management indicated that talks to avert any such industrial action continue and Ms O’Sullivan said she is “confident they will bring a resolution”.

Asked whether she would support the establishment of an Independent body to deal with Garda whistleblowers, Ms Fitzgerald said: “I want people to have confidence in the way An Garda Síochána deal with whistleblowers.

“If another independent body is necessary in order to do that I would certainly consider it. I have been considering how we can best reassure the public that what’s happening in An Garda Síochána meets the highest standards. If it requires another independent layer then it’s certainly something I would consider.”

Ms O’Sullivan also said Mr Justice O’Neill would not have the power to demand telephone records.