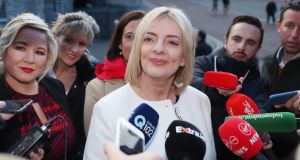 Sinn Féin’s Liadh Ní Riada: “I was a candidate for everybody.” Photograph: Niall Carson/PA

The issue of a united Ireland resonated with the public on the door step, said Sinn Féin candidate Liadh Ní Riada.

She told RTÉ television that “bread and butter issues” were always going to be of concern, but her campaign had been about “giving hope.”

Ms Ní Riada said a united Ireland was at the heart of her campaign of hope. She added that Brexit is going to be a game changer. “We have to have that discussion now and people are up for it.”

Ms Ní Riada said she hoped Michael D Higgins will take on some of the issues raised by the other candidates during the campaign, such as a united Ireland. “I’d like him to take on that discussion.”

The high point of the campaign for her had been the rally in Belfast and she was hopeful that at the next presidential election the people of Northern Ireland would have a vote.

She defended the decision not to have the Sinn Féin logo on her campaign, saying her message had been one of inclusivity. She had wanted more than just a Sinn Féin vote; it was “about reaching as broad a profile as possible.

“I was a candidate for everybody.”