Miriam Lord: Why I am running for President 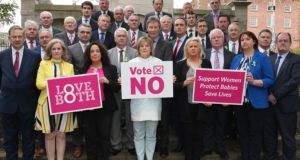 Photographic Genius Award: Fianna Fail’s Waterford TD Mary Butler got 31 colleagues, mostly TDs, to pose together for a photograph on Merrion Square to signal support for the No campaign in the abortion referendum. Photograph: Fianna Fáil

Politician of the season

Simon Harris won plaudits from all sides of the Yes campaign for his handling of the abortion referendum campaign. The Minister for Health showed a steely determination in debates and a cool mastery of plain facts as opposed to dubious assertions. He refused to be drawn into slagging matches or sidetracked by social media attacks.

In the biggest and most significant political story of the year, the electorate voted by an unexpectedly huge margin to repeal the Eighth Amendment to the Constitution. Harris’s surefooted and confident approach to the campaign contributed to it.

7 Beyond the guidelines: How not to get Covid-19 this weekend

8 Coronavirus search: See how Covid-19 is spreading in your area

9 A Kerala Kitchen curry for the weekend

13 Essex lorry deaths: Members of Irish-Romanian gang jailed for up to 27 years

26 Has Eddie O’Connor underestimated the value of his €1bn baby?

28 ‘I got a burning smell in my nose’: Third-wave Covid-19 patients share their experiences

29 Sharing a car? Here’s which windows to open to lower the risk of coronavirus transmission

33 ‘Doug and Kamala together are almost vomit-inducingly cute and couply’: The VP’s stepkids speak