Miriam Lord: What exactly is Alan Kelly doing to a Fianna Fáil senator outside the Dáil?

Man who hopes to take over from Howlin unapologetic 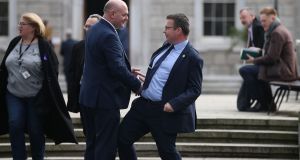 Knees up: Fianna Fáil Senator Diarmuid Wilson gets a friendly knee from Labour’s Alan Kelly on the Plinth on Thursday. Photograph: Nick Bradshaw for The Irish Times

In the middle of a national health crisis no less, a senior politician currently contesting his party’s leadership was clearly observed doing the Hucklebuck on the Leinster House plinth.

Alan Kelly, what were you at? The man who hopes to take over from Brendan Howlin as Labour leader was utterly unapologetic.

AK-47 wasn’t dancing on Thursday. He was trying out a virus-busting non-hand-based greeting on a passing Fianna Fáil Senator. It was a knee-bump, apparently. As an old gameshow host might say: Knees to see you, to see you, knees!

Alan was acting on warnings to avoid handshaking while the coronavirus threat is active. Fist-bump, elbow-rub, foot-shake – there are other ways for politicians to remain hands-on without extending their germ-riddled appendages.

He hailed passing Senator Diarmuid Wilson and tried out a few of his new moves. Diarmuid proffered a hand, Alan feinted to the right and then brandished a knee. Very effective.

If a little worrying. Aodhán Ó Ríordáin, his leadership rival, will have to go one better now. He’ll probably head-butt a nun. The two contenders are shadowing each other everywhere during the campaign in a sickening display of fraternal conviviality.

True to form, they sat side-by-side in the Dáil chamber when business temporarily resumed in the absence of a new government to discuss the recent European Council meeting and the continuing threat posed by Covid-19. The party leaders said their bit during the Order of Business.

Speakers included Brendan Howlin, outgoing Labour leader. As contributions drew to a close, one of the men who wants his job chanced his arm and tried to speak. He caught the Ceann Comhairle’s eye.

“Deputy Alan Kelly, you’re offering. Sorry, I can’t take you because this is only for party leaders and you’re not at this time leader of the Labour Party.” Aodhán snapped to attention. “Same applies to you, deputy Ó Ríordáin” added Seán Ó Fearghaíl. When it was announced that the Dáil would take the time it was not using to elect a new Taoiseach to discuss the virus, a grateful nation heaved a sigh of relief. Salvation was at hand.

At the tail end of her irrelevant speech, Verona threw in a couple of throwaway lines on the virus and sat down

Not only was it the only subject on the Order of Business, but more than 2½ hours were set aside later in the evening for statements on the issue. It was a long slog.

By two hours in and the maiden speech of Verona Murphy, the urge to self-isolate had gone far beyond the realm of the virus. The independent TD from Wexford completely ignored the designated topic and spoke about her election, the economy and the state of the building industry.

Twice, the Ceann Comhairle had to ask her to finish as she was over her allotted time. At the tail end of her irrelevant speech, Verona threw in a couple of throwaway lines on the virus and sat down.

On the plus side, after a day of talking, we can be confident that our politicians are virus-ready. At this worrying time in Leinster House, Independent TD Catherine Connolly spoke for almost everyone.

“I welcome the fact we are not forming another committee.” It’s bad enough living under the threat of a viral pandemic without a special Dáil talking-shop blundering in and making things worse. The vast majority of TDs agreed. Brendan Howlin was the exception.

In his book, there is nothing which cannot be considerably enhanced by the addition of an all-party Oireachtas committee. “I am strongly of the view that this is necessary,” he declared, particularly because we are in “the unusual situation of an interregnum”.

What will happen if significant policy decisions have to be made? Who will provide “political underpinning of the legitimacy” of these decisions? He was referring to Leo Varadkar’s caretaker Government, which is neither here nor there in the context of the general election result but is still, crucially, in power.

You won’t see Leo Varadkar in a brown shopcoat, toting a sweeping brush. How dare they

Words are very important in these anxious days when people are feeling personally vulnerable and very apprehensive about the future.

The acting Taoiseach, who is a medical doctor, explained what we really need to know. “It is worth reminding the House that under the Constitution the Government continues until a new one is elected. The terms ‘caretaker’ or ‘acting’ are not used.” The very thought of it.

He is a Trinity graduate. You won’t see Leo Varadkar in a brown shopcoat, toting a sweeping brush. How dare they.

Until whenever, Leo stressed he remains in charge. But he’s not the boss of Mary Lou McDonald or Micheál Martin anymore.

The Sinn Féin leader made it clear that the other main parties must not “be left as an afterthought” when decisions about the coronavirus strategy are considered.

The Taoiseach (he’s no caretaker) readily agreed with Mary Lou. “I am happy to give exactly that assurance.”

The Fianna Fáil leader was in favour of some sort of committee, but is happy with “a mechanism” allowing public representatives, for example, to have access to information which will help them answer questions from the public.

“The psychology of a public health scare is at times as important as the scare itself” Micheál said. His TDs have discovered that when the virus is connected with their locality, “basically the phone explodes.”

Social Democrat Róisín Shorthall provided some helpful information. The Business Committee met earlier on this committee business and decided it was not a good idea to establish a new one to monitor the situation. There is no point in dragging senior public health officials into Kildare Street to answer questions when they are needed at the coalface.

Briefing sessions should suffice. If emergency legislation is needed, she has “no doubt that all members will make themselves available to return here at short notice”.

The HSE has been given the green light to use additional resources, staff and financial, as needed

Catherine Connolly wanted to talk about context. Primary care facilities are being closed at an “unprecedented” rate in the west of Ireland, said the Galway-based TD. “We have a current crisis. There are major closures planned in primary care and we are talking about capacity in relation to this virus. We really want to get real and put it in perspective. There is a crisis as is.”

This time, though, the chequebook is coming out. The Taoiseach said money over and above the HSE’s budget for this year will be available to fund whatever actions are needed to fight the virus. Closed intensive care units are to be opened up and extra beds will be made available. Because you see, people are dying all the time but this is different.

“The HSE has been given the green light to use additional resources, staff and financial, as needed, so that we are able to contain Covid-19 for as long as we can.”

Richard Boyd Barrett had a helpful suggestion. As this is a crisis, there should be no “two-tier system” in operation. Pass legislation if needs be, but open up the private beds too if the situation deteriorates, he urged the Taoiseach and Fine Gael leader.