Middle class vote swings to the Shinners, while Ming high-ponytails it to Brussels and once withered Greens begin to sprout again 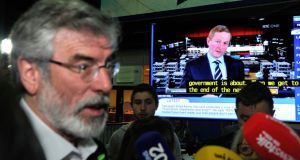 Sinn Féin showed this weekend there is more than one way to stage a “spectacular”. Not even halfway through the count and party leaders were already admiring their handiwork.

“That landscape is changed, and changed utterly,” marvelled Gerry Adams.

Gerry tried to hug us. It’s the new dispensation.

On a national level, the party didn’t do as well as might have been expected. But that’s a minor inconvenience when set against an absolutely stunning performance in Dublin.

Sinn Féin (screamingly mainstream now but trying desperately to hide in the closet) had the other establishment parties reeling. Fine Gael and Fianna Fáil supporters were shocked.

These would be the ones you see at counts: wheezingly amiable men in well-pressed smart-casual attire and expensively handbagged women dressed for gossip and a cocktail party. “They topped the poll in Dundrum, for God’s sake!”

Seasoned party hands passed around the latest results; each fresh communication bringing further bad news. Dun Laoghaire had fallen. Clontarf, Howth and Malahide too. And it was touch and go in Rathmines and Rathgar.

They wandered shakily around the count centres like a contingent of Bishop Brennans after Father Ted kicked them in the arse.

Something dreadful had happened. It really shouldn’t have come as a surprise to them, but it did. The middle classes were turning to Sinn Féin. Dear God, it was as if Gerry Kelly and Martin McGuinness crept into the golf club during Captain’s Prize and defecated on the carpet in the members’ bar.

Their obvious discomfiture only deepened the delight for the simmering Shinners.

As a group, they weren’t the biggest success of these elections; that honour went to the Independents and, in particular, Ming Flanagan.

There is no truth in the rumour that the Ceann Comhairle was witnessed doing cartwheels down Dún Laoghaire Pier when word came from Castlebar that his Dáil tormentor is headed for Brussels.

Eamon Ryan, leader of the Greens, was chuffed to find himself in the mix for the final seat in Dublin. His party all but disappeared from the political scene after the last election. Now, they’re sprouting again.

Party colleagues were triumphing in the locals while former junior minister, Paul GoGo Gogarty, running as an Independent, took a seat in Lucan.

Ordinarily, the Greens aren’t the type to take pleasure in the misfortune of others, but they made an exception. When they were ingénues swimming in a Fianna Fáil government, Labour gave them a terrible time. So as Gilmore’s crew were getting kicked up and down the country by the electorate, there was no sympathy.

Eamon was at the count in City West to watch as the ballot papers were sorted. “I love the collegiality of the tally,” he said.

He seemed pleasantly surprised and gratified by his good showing.

Fianna Fáil’s revival around the country was good news for Micheál Martin, but it was eclipsed by the Sinn Féin onslaught in Dublin.

Mary Hanafin and Kate Feeney both emerged with seats following their highly publicised selection shambles in Blackrock. A tearful Hanafin got in on the first count, with Feeney following at a later stage.

Seán Haughey (hardly a new face) did the business in Clontarf. He fought an interesting campaign. We’d love to tell you more about it but, as he adopted a Greta Garbo strategy and refused media requests to accompany him on canvasses, we can’t.

The lord mayors of Dublin and Cork got the heave-ho: both members of the Labour party.

The claims by Independent Senator Rónán Mullen that the “Dublin media” have it in for him were sadly compounded by the realisation that voters in Midlands/North West don’t need the Dublin media to tell them what way to vote. They gave him the boot all of their own accord.

Labour struggled to find any silver lining in its black cloud. Joan Burton sent out mixed messages about the state of her tiresomely fluctuating confidence in the party leader while Pat Rabbitte talked about “refurbishing” the programme for government.

And everyone sniffed that nobody gave them credit for all their “heavy lifting”.

Joe Higgins worried about fellow socialist Ruth Coppinger winning the byelection in Dublin West. She eventually took the seat, but it was a close call as Sinn Féin romped up on the inside.

“It’s the national surge,” Joe explained. “You can’t fight it. I had a national surge in 1992 in Ballyfermot, when Joan Burton was elected on the Spring Tide. Nobody knew who she was.”

Enda Kenny was in Longford on Saturday night. He was in the worst of humour, doing himself no favours during a petulant telephone interview with Newstalk’s John Keogh.

Contrast that with Gerry Adams, who strolled into the count centre with Mary Lou McDonald by his side. On Saturday, the votes weren’t even half counted but Gerry and Mary Lou were in full general election mode, the events of the last few weeks merely a pit stop along the road of the Sinn Féin Project.

Things will change now, says Gerry. How? “The parlance will change to include the word ‘citizen’.”

And there’s a freshly minted catchphrase too; Sinn Féin is “rooted, relevant, republican”.

Ah yes, Gerry and his disciplined, community activists/candidates are on a roll.

The Government parties say this Sinn Féin coup in the capital is a good thing. They will have to take tough decisions at council level now.

They dismiss the results as a mid-term wake-up call from the people. When a general election comes, they will shy away from the Sinn Féin brand.

Mary Lou was talking conditions for going into coalition yesterday.

Swathes of the electorate crossed a boundary with their punishment voting. The sky didn’t fall in.

They know they can do it now. Sinn Féin know that too. The project is on course.