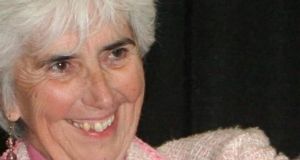 Maureen O’Sullivan: “There is a new drug on the streets now called ice, and it’s ravaging communities. The people working to help addicts and their families need more resources, not fewer.” Photograph: Niall Carson/PA Wire 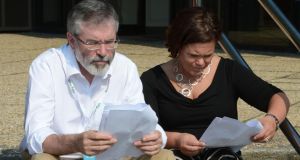 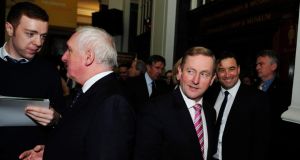 Taoiseach Enda Kenny TD walks past former taoiseach Bertie Ahern at the launch of the Ireland 2016 programme of events to mark the centenary of the 1916 Rising. Photograph: Aidan Crawley.

When Mary Lou McDonald threw Gerry’s teddy bears out of the Sinn Féin pram on Thursday, she did no favours for her Dublin North Central colleague, Independent deputy Maureen O’Sullivan.

Maureen was due to represent the technical group at Leaders’ Questions, but she was prevented from speaking thanks to the antics of her fellow constituency TD.

She succeeded the late Tony Gregory in Leinster House and is known for her tireless work on behalf of the disadvantaged in Dublin’s north inner city. She had hoped to raise the issue of drastic funding cuts to the budgets of community groups working with people struggling to survive on the margins.

“Disappointing that my Leaders Questions on Communities in the Inner City was disrupted. Esp since the Water issue will be debated next week,” tweeted O’Sullivan from her office, as Mary Lou was taking to Facebook from her principled pew in the now silent chamber.

“Somebody had to make a stand for those that are struggling,” she wrote, surrounded by her fellow Sinn Féin TDs as they settled into their four-hour sit-in protest.

Mary Lou had to stay put for the entirety, and conflict veteran Gerry Adams valiantly remained with her. Most of the others abandoned the Struggle for a while around 3pm and belted down to the canteen for a spot of lunch.

Its “vision” is to “improve the life chances and opportunities of those who are marginalised in society, living in poverty or in unemployment through community development approaches and targeted supports”.

Maureen tells us that while many community groups around the country stand to lose out on critical funding, it appears that some areas have been marked out for more cuts than others.

Dublin North Central is one of them.

She has already written to Minister for the Environment Alan Kelly, asking him to explain how the funds are being allocated.

“It appears that rural projects are set to face cuts of 10 per cent and urban groups are going to lose out by 20 per cent, but inner city groups will be down by 38 per cent. This is totally disproportionate and it’s causing a lot of stress to people who are trying to work with some of the most disadvantaged groups in society.”

Maureen is very worried about the impact of the new “funding model” on vital projects, such as after-school care groups and addiction programmes.

“There is a new drug on the streets now called ice, and it’s ravaging communities. The people working to help addicts and their families need more resources, not fewer.”

She has asked Kelly to meet representatives of community groups, but is yet to get a response.

Would Maureen have got one from Joan Burton on Wednesday? Probably not the one she wanted but, at the very least, the issue would have garnered some publicity and the Tánaiste would have made sympathetic noises and promised to raise the matter with her Minister.

At 4.30pm on Thursday, when the members of Sinn Féin finally abandoned their four- hour Dáil sit-in, Deputy Shane Ross decided to nip into the gentlemen’s loo situated at the doors leading on to the Opposition side of the chamber.

But his way was blocked by a bearded, bespectacled man with big teeth. “I can’t let you go in there,” boomed Gerry Adams, standing firm. “I’m guarding the door.”

Shane, while mercifully not taken short, was rather taken aback. But under no circumstances would Adams let him, er, pass.

Then he explained. Mary Lou McDonald was inside. While the rest of Sinn Féin’s TDs could come and go as they pleased during their Dáil stunt, McDonald had to remain in the chamber.

She was the one refusing to leave the chamber after the Dáil voted for her suspension, so her presence was vital to the success of Sinn Féin’s Armchaired Struggle.

As one might imagine, people began to ponder the indelicate question of toilet breaks, remarking that she would have to go to the loo at some point. As the hours dragged on, we wondered if a comrade might smuggle in a chamber pot.

But, fair play to her, Mary Lou held on heroically until the sitting was adjourned, whereupon she tore up the steps to the nearest lavatory, which happened to be the gents’.

And Gerry Adams did bouncer at the door.

With the 1916 centenary bunfight on the horizon, a big crowd turned up in the GPO on Wednesday night for the launch of the Government’s programme of events.

A big crowd turned up outside as well, to protest against water charges.

The GPO will become an interpretive centre to mark the anniversary, while parts of Richmond Barracks will be restored – “in particular the buildings where the 1916 leaders were interned and court marshalled [sic]”.

Among the guests at the launch was Bertie Ahern, who is looking forward to the centenary and would make a terrific interpretive centre in his own right.

However, he thinks more education about the Easter Rising is needed for our young people. He has discovered many have a poor grasp of what happened during this turbulent period in Irish history.

In incredulous tones, the former taoiseach described how many students just look at him blankly, with their mouths wide open, when he tells them what happened in 1916 and in the years to follow.

Bertie laughed, indicating how his young audiences haven’t the foggiest idea of what he’s on about.

1 Coronavirus: HSE experts support the early reopening of schools
2 Quarantine may be lifted for arrivals into Ireland from countries with low Covid-19 cases
3 The momentum behind calls to ease lockdown may become irresistible for politicians
4 Miriam Lord: Reluctant Halligan bangs the nail on the head
5 All students will not return to school even if social distancing rules are relaxed – McHugh
Real news has value SUBSCRIBE