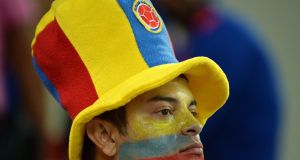 A supporter of Colombia reacts after the penalty shootout of the FIFA World Cup 2018 round of 16 match against England in Moscow. Sinn Féin TDs and Senators were supporting the South American side in the Dáil bar this week

The Oireachtas Members’ Bar was jammed on Tuesday night as TDs and Senators watched the World Cup clash between England and Colombia. Afterwards, Government and Fianna Fail TDs were at pains to stress that they were all cheering, in the interests of neighbourliness and diplomacy, for England.

However, in the private confines of their exclusive oasis, we understand the story was somewhat different. The roof nearly blew off the bar when Colombia scored a last-gasp equaliser, such was the volume of the cheers.

As this was a special occasion, regulars were treated to a rare appearance from Sinn Féin politicians, who usually steer clear of the place. Around ten of them bagged the best and most comfortable seats in the top corner and they cheered on Colombia with gusto. Senator Fintan Warfield, the youngest member of the Oireachtas, was the exception, although some observers swear they saw London-born senator Paul Gavan — a big Spurs supporter — clapping under the table for Gareth Southgate’s boys.

When England finally cast off their jinx and won a World Cup penalty shoot-out, the Sinn Féin contingent was most disappointed, albeit probably glad to escape the roars of Fine Gael Senator Frankie Feighan, who was every bit as passionate cheering on England as Sinn Féin senator Máire Devine was in urging on the Colombians. Some said Frankie was only doing it to annoy them.

There are also televisions in the adjacent Oireachtas visitors’ bar, but they only broadcast live proceedings from the Dáil and Seanad. Without any sound.

While Mary Lou’s politicians in Leinster House seemed to have a rollicking good time watching the match, their counterparts across the Irish Sea weren’t so lucky. Sinn Féin’s annual Westminster Summer Party presented an unfortunate scheduling clash for guests hoping to watch the big football match, with Michelle O’Neill’s soiree kicking-off at the same time as the decider in Moscow.

Guests expressed some surprise and disappointment at the fact that the event wasn’t rescheduled, particularly in the light of Sinn Féin’s well known interest in the beautiful flora and fauna of Colombia. Nonetheless, the Shinners’ seasonal shindig attracted attendees from all the Westminster parties, apart from the DUP. Even the Tories sent along a couple of representatives to enjoy the live Irish music.

Before the gathering could go ahead, a suitable room in the Palace of Westminster had to be found. Two were available. It didn’t take the party long to decide which one to choose and the speeches, drinkies, and nibbles were duly served in the Clement Attlee Room. It wouldn’t have mattered if it only had three walls and half a roof, because there was no way the Shinners were ever going to allow their bash take place in the Margaret Thatcher Room.

The annual Fourth of July party at the American ambassador’s Deerfield residence is usually a bit of a bunfight, with hordes of TDs and senators abandoning Kildare Street for the evening to drink beer and toast Uncle Sam.

This year the event wasn’t such a big draw. A number of politicians boycotted the occasion in protest at the US administration’s separation of migrant families along the Mexican border, while the fact that Trump has yet to appoint an ambassador isn’t going down well in Government circles. Ireland has been without a US ambassador for 20 months and is just one of five European countries in this position, joining Luxembourg, Switzerland, Hungary and Belgium.

Among those tucking into the hotdogs and burgers were former ministers Michael Noonan and Frances Fitzgerald, but there were no Government big hitters in attendance. Tánaiste Simon Coveney was in London while Leo Varadkar was in New York, getting into some Trump-related hot water of his own making.

The Taoiseach’s response this week to a barrage of criticism over his leaked remarks about the Irish media was intriguing. His unguarded comments at a private lunch in New York were – surprise, surprise — channelled back to some grateful hacks. Leo’s guests were a group of young and young(ish) Irish people who are doing well for themselves in the Big Apple in areas such as technology and media. Just the type of folk who routinely chronicle the minutiae of their lives on their phones.

While profusely and profoundly apologising to journalists and declaring he has no peer when it comes to recognising the value of their worthy endeavour, the Taoiseach has been oddly guarded on what exactly he said to them at this private lunch while not once denying that he expressed “sympathy” with Donald Trump and his ongoing battle with journalists. He glossed over questions in the Dáil and elsewhere about the exact nature of the remarks.

Perhaps Dan Mulhall, Ireland’s ambassador to the US might be able to refresh his Taoiseach’s memory. Senior diplomat Dan also attended the lunch, although perhaps he was tweeting some Yeats poetry (which apparently he does regularly) when Leo had his Trump moment. In any event, he didn’t intervene.

Could it be that the Taoiseach and his people are petrified that there may be a recording somewhere out there? In his day and age, that is entirely possible, if not exactly cricket. The awful fact of the matter for them is that they don’t know. Until the Sunday papers come out, it’ll be squeaky-bum time in Government Buildings.

A taste of Ireland in Kildare Street

The Ceann Comhairle organised an Irish-food tasting experience in the Members’ restaurant on Wednesday evening. It was such a success he is considering more events for the future — the dinner was quickly sold out with catering staff doing 150 covers on the night.

Seán Ó Fhearghail pulled together his menu of sharing platters with the help of Kildare Farm Foods, which stocks produce from suppliers in 15 counties. The farm-shop employs 50 people from rural Kildare and exports to 14 countries worldwide. “A few months ago I came across a very successful food expo and immediately thought something similar in Leinster House would serve to showcase the top quality produce so many Irish companies, large and small, are offering at the moment” he told us.

“On the night, over a dozen companies from the length and breadth of Ireland displayed their wares in the Oireachtas restaurant. I was absolutely thrilled with the success of it and the response from members and staff was very positive.”

The desert selection included Killowen Farm yoghurts from Wexford topped with granola from Maria Lucia Bakes in Wicklow and Velvet Cloud sheep’s milk sorbet from Mayo with Scúp Gelato ice-cream from Wexford, while Cooleeney in Tipperary and Wicklow Cheese ended things with a dollop of relish from G-Jams in Laois. The diners stuck to juice from Ballyhoura in Limerick and Cork.

In the Dáil on Thursday, Fianna Fáil’s James Lawless, congratulating the Ceann Comhairle for putting on such an excellent spread, suggested he might put craft beer in the spotlight the next time and give that industry a boost. Labour’s Alan Kelly, whose craft beer Bill was passed this week, fully agreed.

Kingdom to come for Cabinet

The Cabinet is off on tour again. Leo Varadkar is taking his troops to Kerry later this month before they break for the month of August. It’s all very hush hush and we’re not sure what part of the Kingdom will be graced by their presence.

Tralee, with its Institute of Technology, is a distinct possibility. But what about Dingle, Listowel, Killarney, Kilgarvan? The Healy-Raes would surely lay on a big welcome and would only be too delighted to roll the red carpet out and over Shane Ross. This won’t be a summer sightseeing jaunt for the Merrion Street mob – a normal, full Cabinet meeting is planned and as there isn’t one in August there will be a lot of business to get through.

Meanwhile, with the Oireachtas racing through its legislative programme as the final week approaches, TDs and Senators are beginning to wind down. Quite a number of them are heading to Croke Park on Saturday night to see Michael Bublé. One of them will not be Fianna Fáil’s Robert Troy who emailed every member of the Oireachtas on Thursday with the bad news that he won’t be able to make the concert and the good news that he had two premium level Hogan Stand tickets to sell at face value.

Brendan Griffin, junior minister for sport, won’t be doing any dancing in Dublin on Saturday night. Griffin is taking part in the 35th annual Ring of Kerry cycle – Ireland’s biggest one-day charity fundraiser. It’s a 175km ride and the Castlemaine man has been training intensively for the challenge. He’ll be hard pressed to keep up with his former boss, Enda Kenny, who will be lining up for his seventh spin. But they should be well home by the time Killarney teacher Anthony Cronin completes the course. He’s doing the Ring of Kerry on his penny farthing