The party needs to stop talking itself into opposition, reckons Simon Harris 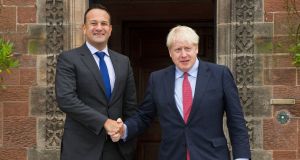 Leo’s green and pleasant performance in Cheshire should boost flagging spirits in Fine Gael, where the mood is not as chipper as some would like it to be.

At Wednesday evening’s parliamentary party meeting a number of speakers bemoaned the feeling of “negativity” in the ranks. If that isn’t bad enough, they are apparently getting it on the doors, too.

Time to stop the rot, declared the Minister for Health, delivering an impassioned rallying cry to the troops as he called for an end to all the negativity. They must push back against the swagger of Fianna Fáil, stressed Simon Harris.

And they need to stop talking themselves into opposition.

In a welcome moment of levity, he also spoke out against people leaking to the media. There was a time when Simon was considered leakier than a geriatric Shih Tzu with a kidney infection. But to be fair to him, it’s a crowded field.

A number of Senators took up the call to ditch the negativity and think positive thoughts – Michelle Mulherin and Jerry Buttimer chief among them. However, it was Catherine Noone who was most exercised by the question of banishing the dark clouds from Fine Gael and introducing some sunshine and optimism to the equation. What’s more, she thought she had the solution.

“I think we should have some sort of positivity summit,” Catherine suggested.

Good luck with that.

Photo for the future

There was a strong bang of Posterity Photography from that charming shot of Leo Varadkar and Boris Johnson strolling down a tree-lined avenue following their Brexit meeting on Thursday: the two men symbolically going into the green tunnel the day before Michel Barnier gives his EU team the green light to go into the tunnel and open Brexit negotiations again with the UK.

Or perhaps that’s a spin too far.

They looked well, the picture looked well-planned and they might both do well out of the episode.

This sudden injection of positive movement into the long-running Brexican stand-off will do wonders for the Taoiseach’s image, and if it looks like he has staved off the appalling vista of a no-deal outcome, it can only improve.

The rapidly evolving situation has stoked up speculation that Leo will cut and run to the country in November if matters stabilise on the Brexit front. It’s a big if, but still . . .

Something is going down across the way. The authorities have taken note of the Kildare Street cars and contact some of the incarcerated owners

“If there is a deal to be had he’d be f***ing mad to hang around,” said one Government insider on Friday who reckons they can hang a good election performance on the Brexit hook.

After Thursday’s meeting, the Fianna Fáil leader tartly tweeted: “I’m pleased that the megaphone diplomacy has been replaced by proper & serious Brexit discussion today. The signals coming from Liverpool are encouraging and we hope that positive momentum can be sustained over coming week.”

Minister of State Patrick O’Donovan hit back immediately with: “Disappointing to see such petty partisan comments from Micheál Martin at such an important time in the Brexit negotiations for Ireland. Following the example of the DUP with ‘megaphone diplomacy’ is hardly helpful.”

His response underscores Fine Gael’s sudden gallop to the Brexit moral high ground. If the party is still up there after October 31st, Leo Varadkar will be sorely tempted to make the break. There are four by-elections due next month. Fine Gael looks set to lose three of them with an outside chance of taking one.

“Why get your arse handed to you on a plate in the by-elections when you have the best chance you might get to win a general election?” was how a glum Fianna Fáiler saw it on budget day.

And if the Brexit signs improve, Paschal’s no-deal budget might not be needed.

“I’d say he has the second lever-arch file in the drawer with the goodies ready to go. The money is there,” argued the senior government TD.

November 22nd or 29th are the dates being mentioned.

The ornate iron gates are securely locked. Solid metal barriers, high and wide, rise in front of them. Outside there is more metal, and protesters crowd both sides of the compound.

They have chained themselves to the gate on the eastern flank. It cannot be opened.

To the west they have strategically withdrawn away from the building and sealed off the two approach roads. Kildare Street and Molesworth Street are impassable now.

There is no vehicular escape from Leinster House.

Most TDs and Senators abandon their cars at the Merrion Street side because of the chain gang tethered to the gate.

We knew the boxes had to be in a car similar to mine, and we finally tracked them down. But we couldn’t take them out because of the dog

But something is going down across the way. The authorities have taken note of the Kildare Street cars and contact some of the incarcerated owners.

“I got this hush-hush message over the phone: ‘We have an escape plan.’ I was told to get down to my car as quickly as I could,” recalls one doughty member of the escape party.

Politicians and staffers leave their offices and make for the plinth, looking nonchalant and whistling the theme to The Great Escape under their breath.

At 7.30pm they begin lining up behind a “lead car”, under orders to follow it when given the nod.

Some sit in their vehicles, engines idling. Others potter around, chatting. The two groups of protesters blocking both ends of Kildare Street can’t see this. The road area in the middle of the street is clear.

At around 8.15pm, the balloon goes up and the convoy moves out.

As oblivious protesters sing and slap their drums, the convoy turns sharp left, races past the museum and swerves left again through a recessed service entrance known as Fisherman’s Gate. The lead driver hurtles the escapees around a maze of narrow roads at the back of Leinster House and the museum, exiting via the anonymous ministerial entrance on Merrion Street.

And they’re gone. Into the night.

One of the liberated heroes relives the drama. “All of a sudden somebody shouted, ‘Into the cars, now! Go, go!’ ” and we all revved up. The main gates swung open and the electric barriers went down, and we sped out the gate after the lead car. It was brilliant, like one of those disaster movies. I half expected to see Bruce Willis in a dirty vest driving up at the front.”

The Great Escape from Stalag Waffle.

Can’t wait for the movie.

The dog and the homework

The TD for Kildare South sent an email to all Oireachtas member earlier in the week, seeking their help.

“Dear all, sorry to disturb but if your car was parked in the Kildare Street car park yesterday, I would appreciate if you could check to see if you have three boxes with material for myself. My intern brought them down and put them in the wrong car.”

There was no word for two days. As election speculation was rising, had her flyers disappeared into a rival’s car, never to return?

Fiona got good news on Thursday. They were in John McGuinness’s jalopy. He hadn’t read the email.

“We knew the boxes had to be in a car similar to mine, and we finally tracked them down. But we couldn’t take them out because of the dog. There was a big German shepherd sitting in the back. We were a bit nervous about opening the door and we couldn’t find John. He loves that dog.”

His secretary came to the rescue. “She’s on good terms with the dog,” explained Fiona.

Budget day details are awaited with great interest on the domestic front every year. But on Tuesday, when Paschal Donohoe delivered his financial statement, it was surprising to note a distinguished group of international business heavyweights sitting in the front row of the visitors’ gallery and taking it all in.

Did they know something the rest of us didn’t know?

They left as soon as Paschal finished his speech, to be greeted by Tánaiste Simon Coveney, among other politicians, as they made their way across from the Dáil chamber to the Seanad.

Cathaoirleach Denis O’Donovan welcomed them when they entered. Among the group from Swiss multinational Liebherr was vice-chairman Isolde Liebherr and her daughter Johanna Platt, who is a member of the board and joint director of the manufacturing giant’s hotel division.

Leibherr employs around 800 people at its shipping cranes manufacturing plant in Killarney and runs three five star hotels in the county – the Hotel Europe and Dunloe Hotel in Killarney and the Ard Na Sidhe in Killorglin.

The Liebherrs flew by private jet from Kerry to Dublin for their budget day visit. However, the timing was coincidental. The family are old friends of Killarney-based senator Paul Coghlan and asked him if they could come and visit the Dáil and Seanad some day.

The group, which included Hotel Europe manager Michael Brennan, had lunch in the Oireachtas restaurant where they met the Ceann Comhairle. They also bumped into Fianna Fáil leader Micheál Martin, who told Isolde that he met her brother Willi in Zurich back in the day when he was minister for enterprise. Simon Coveney performed the official opening of the refurbished Dunloe Hotel last year.

The proverbial great day was had by all.