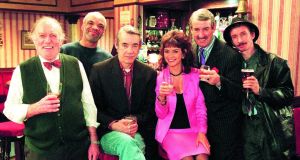 “Kerry TD John Brassil shouted ‘Trigger’s broom!’ Nobody had the foggiest idea why.” Above, Only Fools and Horses

During Wednesday’s Dáil exchanges between the Taoiseach and the Fianna Fáil leader on what constitutes a consortium, and if the group now in the final frame for the national broadband contract is the same as the one that submitted the original tender, a dispute arose over whether a “changed” consortium is, in fact, a new one.

It was all very confusing.

But not to Leo Varadkar, who had explained it to Micheál Martin the day before: “The consortium has changed but it is not a new consortium. It is a consortium that has changed in its composition during the process, not a new one.”

It took Micheál a day to process this. When he returned the following afternoon for Leaders’ Questions, he told Leo his reply “was quite remarkable”.

With all the certainly of John Cleese calling out a dead parrot, Micheál pronounced “that is a changed consortium.”

But Leo, as adamant as the man who sold the dead parrot, begged to differ.

“I said yesterday – and you quoted me correctly – that it is not a new consortium but the composition has changed, and that is my position … I suppose it’s a little bit like Fianna Fáil – your composition changes from time to time. You are not the same people who were here three years ago or five years ago and from time to time your leader may change, but you’re still the same Fianna Fáil.”

That had them scratching their heads.

Darragh O’Brien looked across the floor at the Taoiseach, who took over from Enda Kenny a year and a half ago.

Then his party colleague, Kerry TD John Brassil, shouted “Trigger’s broom!” Nobody had the foggiest idea why.

Micheál Martin wasn’t letting this one go. “It’s not a laughing matter. The bottom line is I asked you a very serious question. This a new consortium. Is it now the new norm that in a major tendering process organised by government that the bidder can change at the last minute? There is an uneasy silence about this, Taoiseach. It’s being glossed over. Is it acceptable at the 11th hour you end up with a completely different bidder? With no telco experience? That the two major telco utilities in the country have shunned this deal?”

Simon Coveney told him that was why the process was being independently assessed.

But the Fianna Fáil leader kept repeating what he believes to be fact. “This is a new consortium, not a changed one. It’s being glossed over … People are not giving me a straightforward, honest answer.”

How many times did the Taoiseach have to tell him?

Things began to get a bit nasty at this point. Tiring of the questions, Leo began hinting at dirty tricks.

“It does raise a question for me: what are the motivations of the Opposition here?”

“To get it done right,” snapped Micheál.

“Is their motivation, is their plan, to actually try to scupper this project so that people in rural Ireland are denied infrastructure they need?”

“You had to sack a Minister over it, not us,” bridled Micheál.

Perhaps Leo Varadkar should keep in mind the wise words of Bertie Ahern before indulging in dark insinuation: “I don’t think it helps people to start throwing white elephants and red herrings at each other.”

Meanwhile, we tracked down John Brassil, who explained why he was shouting “Trigger’s broom” at the Taoiseach during the great debate.

“Do you remember Trigger from Only Fools and Horses? He was a road sweeper who boasted about using the same broom for 20 years, but then he said it went through 17 new heads and 14 new handles.

“How can it be the same bloody broom, then?” he was asked.

So Trigger produces a photograph of himself and his broom and says: “What more proof do you need?” It’s the same thing with Leo’s consortium.”

Afternoon tea is being served in the Oireachtas Members’ Restaurant for the festive season. It’s very nice, with fine china and little cakes and fancies and delicate finger sandwiches for people with delicate fingers.

The menu will be tweaked on December 14th, which is the date in 1918 when Irish women (aged 30 and over) voted for the first time. The fare on offer will feature the type of dainties that might have been served 100 years ago.

Julie Lyons from the Oireachtas catering team has already perfected her recipe for gur cake, an old Dublin favourite back in the day. She tells us that Odlums made gur cake in 1916 and it was sent in to the volunteers in the GPO. It was the cheapest type of pastry in the baker’s: bits of stale bread and scraps of cake went into it along with brown sugar and spices and cold tea, and it was a favourite of the urchin children – or gurriers – in the city. The dark filling went between two thin layers of pastry, it was baked in huge slabs and cut into squares.

The cooks in Leinster House are also planning a special lunch menu to commemorate the first Dáil, which sat on January 21st, 1919. They had plainer tastes in those days. The menu in the Mansion House was very simple:

The starter was clear soup, followed by roast beef, ham and vegetables with apple tart and custard for dessert.

Lynn Ruane was the toast of the Seanad on Wednesday after she scooped the award for non-fiction at the An Post National Book Awards.

The Senator for Trinity College Dublin got a round of applause after she thanked her colleagues for their kind words. “Last night I was quite shocked to hear my name. I was in a category with Mary Robinson and all, and I was, like, there’s no way! So to hear my name … ”

She said People Like Me is not just her story but the story of her community and its experiences. She felt a big responsibility to tell that story in a respectful way. And to have the book acknowledged in this way “wasn’t only acceptance of me and my story, it was a huge win, I think, for my community, to have our histories acknowledged in the way we have had.”

Now Lynn has another big goal I her sights. Before she donned her evening dress for the awards dinner, she hosted the Homeless World Cup team in the Members’ dining room in the afternoon. They met Minister for Housing Eoghan Murphy and Minister for Sports Shane Ross and sought support for their campaign, in conjunction with the very successful Irish street leagues, to bring the Homeless World Cup to Ireland in 2021.

Lynn told the Seanad that the street leagues, which have been operating for more than a decade, have helped to reintegrate people into their communities after they have experienced homelessness and eviction.

“Hopefully, we can get behind the bid to have the World Cup here. We don’t need the Aviva Stadium or anything – it’s a street league. Smithfield will do, but we need to raise significant funds.”

Senator David Norris was delighted to congratulate his Trinity colleague “on her remarkable achievement in winning a major literary award”.

He said his autobiography was nominated some years ago, but it didn’t get anywhere.

House Leader Jerry Buttimer said it was a great read.

“Yes, but it was banned by RTÉ because of the use of the word ‘prick,’ ” said Norris.

“Obviously, people had not read the Bible and realised it ... was a quote from the Acts of Paul. How we have declined in our religious education.”

But the best line belonged to Kerry Senator Ned O’Sullivan, who, in adding his congratulations, remarked: “It’s a fair achievement for any politician to be able to write a book with no fiction in it.”

A most uncomfortable Sofa

We weren’t sure if we were reading a Government email or an unsolicited ad from Harvey Norman.

The missive was sent on Tuesday, with routine details of the post-Cabinet press briefing. The first item, in bold type, was headed “Sofas”.

Many people like to change their furniture coming up to Christmas, although many more prefer to wait until the January sales.

“A Sofa is designed to regulate the legal and administrative arrangements for members of foreign forces operating within the State where they are deployed. The triple lock continues to apply and any decision on overseas deployments remains a matter for Government and the Dáil,” it read.

Apparently, Ireland has “previously signed but not ratified this EU Sofa”.

They make perfectly good ones in Navan.

“Given Ireland’s constitutional prohibition to receive and base foreign troops on its territory, the reciprocal nature of these Sofas does not apply. The Sofas will not apply in respect of foreign forces in Ireland.”

Actually, this one is a two-seater and it’s a safe bet that a lot of TDs and Senators will not rest well on it.

Minister for Foreign Affairs Simon Coveney, on behalf of Minister of State at the Department of Defence Paul Kehoe, brought a memo to Cabinet seeking Government approval to allow Ireland to ratify the “European Union Status of Forces Agreement and sign and ratify the Nato/Partnership for Peace Status of Forces Agreement, otherwise known as Sofas.”

According to the Government “from a practical point of view, these agreements provide legal certainty around the recognition of driving licences, visa regulations, taxation, wearing of uniforms, criminal disciplinary jurisdiction, the protection of military camps, records and information as well as claims and liabilities.

There have been occasions when the Defence Forces have not been able to participate in international training exercises as Ireland had not ratified the relevant Sofa.”

Expect to hear more about these Sofas in the near future as critics argue that it will badly compromise Ireland’s long-standing neutrality.