Miriam Lord: Presidential candidates get set to be viciously good-mannered 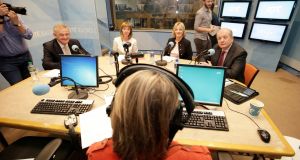 The President wasn’t able to attend, citing the commitments of office.

Seán Gallagher didn’t attend, citing the President’s absence. If Michael D Higgins wasn’t going, then he wouldn’t be going either. He got himself some commitments too and proceeded to Cavan, there to be among his people.

By refusing to join an election debate because the outgoing president wasn’t there, Gallagher instantly relegated the four other candidates to lower-division status. Let them throw all the shapes they want in their bottom of the table tussle, he only togs out for the big time.

Seán operates in the premier, presidential division. He is the only person of sufficient stature to take over from Michael D in the Arás. He is the First Understudy, and as such, must act as if he already has the part.

The remaining candidates were not impressed. Some managed to conceal their irritation better than others. Businessman Peter Casey, who looks a very entertaining prospect, was wonderfully disgusted.

But in turning up for the first debate (while acutely aware that the wily Higgins and his team know full well they can pull the presidential duties card to sidestep potentially damaging situations), their response was the right one. It struck the right note – pragmatic, not petulant.

Listeners to RTÉ radio’s News at One tuned in to hear what the candidates had to say. Joan Freeman, Liadh Ní Riada, Peter Casey and Gavin Duffy obliged them. They fronted up, said their piece and then faced the questions from Áine Lawlor in the studio and the journalists waiting outside.

All four have a vision.

All their visions are lovely visions. It would be hard to fall out with any of them.

But this is a contest. One which requires iron discipline and a heart of steel, wrapped up in a caring cocoon of empathy and understanding. Under three weeks of saccharine passive-aggressive provocation, some candidates will break. It takes stamina to take down opponents while smiling sweetly and cooing about having a national conversation.

The News at One quartet got straight down to business.

The current resident of Áras an Uachtaráin, now the (p)resident until the votes are counted, is doing a great job. None of them (except Peter) would say a bad word against him, but they still had plenty of scope to outline how they believe the job could be done differently by a younger, more energetic person who knows the (p)resident has no role in how his office is funded and who pays for his expensive hotel rooms, but you’d wonder all the same, wouldn’t you?

Three thousand for a room in Geneva, was it? Not the (p)residents fault, but it’s a lot of money nonetheless.

Liadh Ní Riada was the only candidate representing a political party. It is a brand new party called Invisible Sinn Féin.

Invisible Sinn Féin is primarily concerned with the issue of Irish unity and a Border poll, and its standard bearer – MEP Ní Riada – has been pushing this line since her candidacy was announced last week. She arrived in RTÉ on her 55-seater battle bus, emblazoned with the pictures of Mary Lou McDonald and Michelle O’Neill but no mention of the political party they lead.

Sinn Féin doesn’t appear on any of the posters either.

But Invisible Sinn Féin is running a high-profile campaign.

Gavin Duffy, one suspects, has been spending time standing in front of a full-length mirror perfecting his presidential stance. He has it down to a tee now, face side-profile to the camera, the fingers of his right hand twiddling an imaginary pinkie ring on his left little finger, a la Prince Charles.

He did well on Thursday. Steering a bland middle line, avoiding controversy, fiercely conciliatory. He could do well in debates, if he curbs his Michael D tendency towards verbosity.

Uber-confident Gavin wants an “evolving presidency” for an “evolving Ireland” and he thinks his wheeze of setting up an international youth corps is “a great idea” and lots of people have told him so. “Voluntourism” suggested Áine Lawlor.

Joan Freeman wants to set up a Council of State in every county in Ireland to encourage local people to do local things to improve their locality. A sort of “County of State”. She is an ordinary reflection of ordinary Irish people. She didn’t arrive in a bus, she said, taking a little pot shot at Liadh Ní Riada. “I arrived here in a small white car. I have a mortgage.”

Senator Freeman is a leading mental health campaigner who set up Pieta House. Mental Health is the cornerstone of her campaign. When it was pointed out to her that (P)resident Higgins had spoken at length on the issue at an earlier engagement and might he be trying to erode her main campaign pitch, she took no prisoners.

“I think I am actually the true person who can talk about mental health in Ireland . . . Look, I’m the expert in this area. I’m sure Michael D is an expert in other areas but this is the most crucial issue facing this country, along with homelessness . . .”

Liadh, meanwhile, put her foot in it when asked how she would handle a visit to Ireland by President Donald Trump. First off: “I would ask him about his ridiculous hair.”

Afterwards, she had to assert her diplomatic abilities as an MEP and insist it was only a joke.

When asked about reports that she wrote to her daughters’ school asking that she not be given the HPV vaccine, her reply was more problematic.

“I didn’t write to their school at all. I don’t know where you’re getting your information from,” she told Lawlor.

But she said this to Cork local radio at the time two years ago: “I then sent a note into school today with my daughter saying that I didn’t want her to get the vaccine: the HPV vaccine.”

But back to Trump. Peter Casey let fly. “Of course, everyone knows he’s a serial womaniser.” He described the US president as a joke of a man, and a disgrace.

And while he’s at it, President Higgins is also disgraceful for not turning up to the debate. He ditched the candidates to meet Prince Edward, who is 10th in line to the English throne. Peter said he was disgusted.

He loaded up again and took aim at Seán Gallagher, also a “no show”. Gallagher unsuccessfully stood for election last time out. “I mean, he’s been missing in action for seven years,” harrumphed Casey, noting he didn’t materialise again when given the chance by RTÉ.

“What has he done in the last seven years other than sue the taxpayer?”

Peter thinks the campaign is going to be very clean.

Things can only get deliciously worse as everyone becomes more viciously good-mannered.

Perhaps one of the candidates should have informed Gallagher that President Higgins already has a Shadow.

Síoda, (Irish for shadow) is the (p)resident’s dog. And even more popular than the incumbent.

One of country’s main labs unable to process Covid-19 tests over weekend due to staff shortages 13:39
Westmeath nursing home says it is managing Covid-19 outbreak 13:29
Father unaware partner and baby dead until gardaí called to raise alarm 13:21
Science Week 2020 to stage hundreds of virtual events all over Ireland during November 13:10
Golf and tennis clubs closed under Level 5 as deemed ‘non-essential’ services 12:23

1 Man who loses bag with €40,000 of cocaine rings gardaí to report it missing
2 Father unaware partner and baby dead until gardaí called to raise alarm
3 US presidential debate: who won, was it any good, were there any surprises?
4 Two hundred Irish retailers for all your online Christmas shopping
5 Irish far right groups trying to disrupt key State institutions, says Garda Commissioner
Real news has value SUBSCRIBE