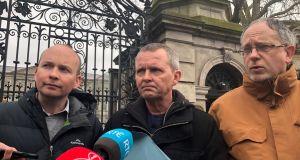 Deep shock in Leinster House on Wednesday when news emerged that a government-formation meeting had taken place, and none of the participants were photographed walking up Kildare Street beforehand looking self-consciously determined and trying to suppress a smile.

What sort of example was that to give the new TDs?

It seems the Green Party and Sinn Féin met in the morning for a spot of Constructive Engagements. That’s probably the fault of the Greens, who organised a big group photo on the plinth on Tuesday, and think that’s enough for everyone. The party had nothing to add publicly to its unchanging stance on going into government, so nothing was said.

Again, what sort of example is that for first-time TDs?

The new intake was around for an orientation session in the Dáil chamber with Oireachtas staff. Important stuff, like who sits where and why, where and how to vote, what not to do in the chamber, how to create a scene and get thrown out for the benefit of the local papers and how to vote for yourself and a party colleague by pressing two different buttons at the one time. (The last two scenarios may not have been explored, but the newbies are, doubtless, aware of them).

Normal service in the vicinity of the plinth was resumed after the earlier aberration when two members of the Sinn Féin negotiating team held a quick media briefing under the portico to discuss how the party’s serious commitment to exploring the “left alternative” was coming along.

Pearse Doherty said the party was “intensifying” discussions with parties and Independents interested in forming “a government for change”.

Watching intensely from around the corner were three TDs from Solidarity/People Before Profit. Richard Boyd-Barrett, Paul Murphy and Mick Barry are three politicians who know their red lines. They issued them before the election and haven’t deviated since.

It’s really just the one line – any support they give to Sinn Féin is predicated on the non-return of either Fianna Fáil or Fine Gael to power. They had lined up a photo-op/briefing outside the gates of Leinster House before their pre-lunch meeting, but the Shinners gazumped them by holding a similar event inside the precincts at the same time.

Afterwards Boyd-Barrett said the meeting went well, and he hoped Sinn Féin would choose the left alternative, but their negotiators told him “straight up” that they were keeping their options open.

At lunchtime the Social Democrats let it be known that co-leaders Catherine Murphy and Róisín Shortall “would be available for pictures” on their way into talks with Solidarity/People Before Profit. Yet before the appointed time the Sol/PBP Three belted out to the footpath before them for their own photo-op and press briefing.

The Taoiseach shouldn’t put himself up for the job on Thursday, said Boyd-Barrett. If Leo Varadkar claimed he wanted the left to step up to power “let him stand aside... he should let the left move on and try and form that government”.

But what if Sinn Féin decides to couple-up with one of the right-wing parties?

“We’re appealing to them not to do that,” said Paul Murphy, as the two Social Democrats barrelled up Kildare Street for their photocall. But the Socialists had gazumped them, and the SocDems veered swiftly through a side gate.

Next to arrive was a video crew from the Guardian newspaper with Sinn Féin’s Eoin Ó Broin in tow. They conducted an interview on the plinth. Suddenly Danny Healy-Rae materialised and walked slowly past them. Then he walked back towards the door again to retrieve his brother Michael.

The pair approached the microphones on Kildare Street, and held forth at length about what they expect for Kerry and for rural Ireland in the next government.

Michael doesn’t want to see any of the messing he saw from the last administration or “any more ministers away with the fairies”.

The video crew at this point was now outside the gates and filming the Healy-Raes. But they ain’t seen nuttin’ yet. When asked if there would be a reprise of their musical arrival for the opening of the last Dáil, Danny and Michael acted suitably coy.

At 3.30pm a couple of big trucks came in and started unloading crush barriers in preparation for the influx of family and supporters of the new TDs when the business of cranking up the 33rd Dáil begins.

The Healy-Raes were asked who the Rural Independents would be backing for the job.

“We aren’t saying until before Thursday morning,” said Michael.

The popular Ó Fearghaíl, who is considered to have been an effective and innovative ceann comhairle, is the hot favourite around Leinster House to regain the position. If he does it will mean Fianna Fáil and Sinn Féin will have the exact same number of votes at 37.

Finally, as another afternoon of landings and departures on the plinth was drawing to a close, the SocDems reappeared at the gates for their close-up. They had concluded the meeting with Sinn Féin, and would be having more meetings over the coming days, said Catherine Murphy.

“We will continue to engage on a policy basis,” said Róisín.

Neither are impressed with what they are hearing from Fianna Fáil and Fine Gael. No sign of any real policy change in a comprehensive way.

Meanwhile, Sinn Féin’s group could be seen at the far end of the plinth, hovering beneath the portico again. When they returned inside through the main doors, which have been readjusted in time for the big influx, the button to open the sliding doors had been moved to the opposite side of the entrance.

“You see, everything is left now!” chortled Doherty, on his way in after another day of photo-ops and meetings.

And Fianna Fáil is keeping everyone waiting until teatime for the big story of Day 10 of formation talks – the announcement of the party’s Negotiation Steering Group.