Miriam Lord: Micheál Martin's notions prove to be wide of the Marc 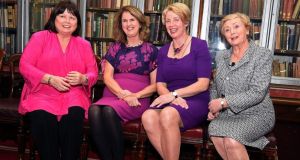 Some people may be praising the Fianna Fáil leader for opting to put his country before his party by agreeing to support the Fine Gael minority government for another year so the expected fallout from Brexit can be tackled without the long distraction of a general election.

Some, but not all.

On Tuesday night as he made his big decision, any notions Micheál Martin might have had of coaxing one of his favourite deputies (after John McGuinness and Eamon Ó Cuív to his cause were soon proved wide of the Marc. It is to his credit that he managed to put a brave face on things when he addressed the Dáil on Wednesday afternoon and then somehow found the strength to follow this up with a media briefing on the plinth.

One can only image the maelstrom of emotions swirling around Micheál’s head as he contemplated the devastating letter he received the night before from Marc MacSharry, Fianna Fáil’s bumptious baritone of the backbenches.

Having launched his missive, MacSharry circulated it to a number of colleagues.

We cannot reproduce all of it, because it’s Christmas and the newspaper can’t bear another supplement.

Micheál blood will have run cold when he read the ominous opening paragraph of the 780-word communication.

“Evening. I missed the PP. [parliamentary party meeting] on purpose as I didn’t want to be saying things publicly. I implore you not to renew C&S. I know I’m not in yer Plans in any event and that’s fine but I do care about our party and our country.”

Marc goes on to say that continuing with the confidence-and-supply arrangement will make the party irrelevant. “An extension of even a day is an endorsement of the last 3 years with all its flaws and scandals. We cannot propose any real policy different to FG for fear of precipitating a crisis and or election, we shuffle between 4 and 8 behind them in opinion polls depending exclusively on the sum of the efforts in ground hurling by our TDs candidates, senators and Cllr’s to stay in the game but the common perception now is there is no tangible difference between us. We have morphed into FG in the public conscience.”

Marc told his leader: “I’m so depressed with C&S and the reality of the roll [sic] of most of us as little more than ‘bums on seats’ and sales agents for the National Draw and Presidents Dinner. I genuinely feel if I lost my seat it would be better than continuing into perpetual irrelevance with confidence and supply.”

Had the party gone for “national government rather than coalition” in 2016, he believed Micheál would be Taoiseach now.

“Granted my Effrontery in going solo at the time is one of the probable many reasons for my exclusion since but look that ship has sailed. I was right though. The Brexit cover story is a red herring.”

The Sligo TD points out that elections have continued throughout Europe despite Brexit and he feels an extension of article 50 beyond March “is certainly likely”. Meanwhile, the country is close to full employment and the housing and health crises need to be addressed.

“The point here is we risk more permanent damage to the party by staying in,” he tells Micheál. “Staying in buys time but for what ?? More time to become even less relevant?? How and when do we get our policy out there. How do beat them up on policy ??”

And when will the leadership seek more input and share information with the rest of the party?

“We need unity of course but as I said before Unity flows from shared ownership. You have worked harder than any leader ever and you deserve to be Taoiseach more than any of them. Please do not renew this .

Thanks for reading. Marc.”

He’ll not last the year, at this rate. And he’s not the only one.

US intern finds Ireland is a small place

A sweet little story this week from Leinster House as the Dáil prepares to rise for the Christmas break.

It concerns American student Maeve Price, one of a group of overseas interns who have just completed a semester working with Irish parliamentarians. The programme is organised by the Institute of Public Administration.

Maeve, who is studying education and communication at Denison University in Ohio, was assigned to the office of the Fianna Fáil TD for Meath East, Thomas Byrne.

She told him about her parents, John and Patricia, who eloped to Sligo in 1993 and were married in Rosses Point. It wasn’t a total surprise to their folks in New Jersey, because the young couple became engaged in August of that year before they decided to make a break for Ireland and tie the knot in Yeats country.

They had ties to the west of Ireland – their great-grandparents came from Galway and Mayo – and John was a great admirer of WB’s poetry.

And so, with help from a priest back home, who contacted Msgr Jennings and Sr Joseph in Rosses Point, a wedding was organised. Locals pitched in with help when they heard the story and two teenagers, brother and sister Frank and Carina Mitchell, were drafted in as best man and maid of honour.

“Then mom remembered that Frank told her he was going to study law. She said to me: “Just ask Thomas if he knows Frank,” Maeve recalls, adding that Ireland may be a small place, but not that small.

“It was so random that my mom thought to even ask Thomas. So I brought up the name and then I showed him the picture.”

Thomas Byrne says he looked at the photograph and thought: “My God, I know him.” They had studied law together in Trinity College. “I called him up in the Law Library and he remembered straight away.”

Maeve completed her stint in Leinster House this week and on Thursday night she and her brother Jack had dinner in Dublin with barrister (and best man) Frank Mitchell BL.

Veteran Fianna Fáil senator, Terry Leyden, caused consternation among female senators on Thursday evening during the final hours of debate before the abortion Bill was passed into law.

Leyden, in a confusing contribution which had senators – along with the Minister for Health – exhorting him to actually read the section of the legislation he was pronouncing upon, said he was proud to have supported the Eighth Amendment 35 years ago. “And people seem to forget this point: this was voted by 140 Members of Dáil Éireann and it was put into the Constitution”.

He then began reading the amendment. “The State acknowledges the right to life of the unborn and with due regard...”

As a chorus of female voices told him his point wasn’t relevant and he was loudly reminded that 1.4 million people voted in May to remove the same amendment, Lynn Ruane shouted at Leyden: “Gone! Repealed! It doesn’t exist.”

He turned, looked in her direction and countered “Don’t get so emotional.”

There was total uproar.

Then Terry took grave umbrage at charges that his comment was misogynistic. “I’m not referring to any sex . . . I see more emotion here with David Norris than I do for any of you,” he told the women, withdrawing his remark if it had offended anyone.

There then followed a most curious exchange of words.

Senator Leyden appeals to the chair, claiming he is being shouted down. “In fairness now, you have to admit that they’re really coming on top of me here at the moment now, big time. In fairness now.”

“We’ll get the violins out,” shrugs Lynn Ruane.

“There is nobody coming on top of you, I can guarantee you that,” declares Marie-Louise O’Donnell, with an even bigger smile.

David Norris isn’t going to be left out. “I’d need to be more emotional than I am to get on top of you.”

Brian O’Domhnaill, sitting behind Terry, is grinning away as the sound of chortling senators fills the chamber.

Terry looks to the chair again. “Sorry, cathaorleach, you’ll have to, kind of, delete some of these comments which I think are very unsuitable, actually.”

We are making no comment on the above. Just leaving it out there.

And to think, we almost abolished the Upper House.

The Four Tánaistí make their debut

It was a female first for Irish politics in the Royal Irish Academy in Dublin on Wednesday evening when four distinguished politicians spoke from the same platform for the first time in their long careers. They also recorded another first when they sat together for a photograph.

Frances Fitzgerald, Joan Burton, Mary Harney and Mary Coughlan joined historian and broadcaster David McCullagh to talk politics and their careers at an event to mark the centenary of womens’ suffrage.

“The Four Tánaistí” went down a storm with the audience.

Perhaps they should consider going on tour.

So here we are, sitting comfortably at home in Ireland and watching the carry-on in Paris with the gilets jaunes and the anti-Macron protests.

It doesn’t affect us here, does it?

Members of the Kildare Street and University Club on St Stephen’s Green – quite a few senior civil servants among them – were aghast at a certain piece of news emailed to them during the week.

Under an atmospheric blue-skies photo of a field in France, near a distant chateau, with two bottles of wine and a large glass of claret resting on the fertile soil beside a bunch of grapes, was this alarming “Club Notice”: “Members please note that due to the riots currently in France, the Club is finding it difficult to maintain levels of our French wines at present.”

They must be bathing in the stuff.

Another notice also caught our eye this week. Or, more precisely, the eye of our man in Brussels, Paddy Smyth.

At lunchtime on Wednesday, as Downing Street’s damage limitation machine went into overdrive and Westminster went into meltdown over that evening’s vote of confidence in Theresa May, an email landed.

Subject? “Merry Christmas from No 10”.

And inside, a nicely lit night-time photograph of that famous front door, with the Christmas tree twinkling and a festive wreath handing from the letterbox with the message: “Best wishes for Christmas and New Year.”

Life goes on, no matter who is PM or who resides in number 10.