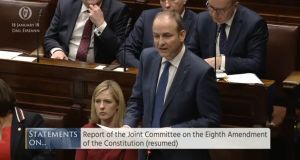 Fianna Fáil leader Micheál Martin outlined his views on the abortion amendment in the Dáil on Thursday and caused astonishment across the political spectrum.

Seven years ago, there was a leadership moment in the Dáil.

It was an afternoon in July and there was a sleepiness about the place as the summer recess beckoned.

The House was to debate an all-party motion deploring the Vatican’s role in the investigation of child abuse in the diocese of Cloyne. Taoiseach Enda Kenny was due to open it. A handful of TDs were in the chamber. Attendance in the press gallery was sparse.

There had been no advance notification of what Enda was going to say; no indication that his extraordinary denunciation of the Vatican would mark a re-calibration of the State’s relationship with the Catholic Church and make headline news all over the world.

And this week in the Dáil, few TDs were around to hear what the Fianna Fáil leader would say in the debate on the report of the Oireachtas committee on the Eighth Amendment – many had already left for the weekend. There wasn’t a rush on to the press gallery either.

When Micheál Martin, the leader of an always unambiguously anti-abortion party, stood in the near-empty chamber to say he supports the repeal of the Eighth Amendment to the Constitution, which equates the right to life of a pregnant woman with the unborn in her womb from the moment of conception, it wasn’t a huge surprise. But when he declared he now supports a woman’s right to legally access an abortion in Ireland up to a 12-week limit, the shockwaves reverberated immediately.

Fianna Fáil is no ordinary Irish political party. It is in Ireland’s DNA.

No matter what your opinion on this controversial issue might be, what Micheál did was a defining moment for him, his party and for the State.

There was astonishment right across the political spectrum, and in the media too. Not least from members of Micheál’s parliamentary party which had held a three-hour meeting on the abortion question the previous night. He told them he favoured repealing the amendment, but that’s where he left it.

Yet he didn’t make a snap decision after that meeting to go further in the actual debate, which continues next week. In fact, he wasn’t even down to speak.

What happened next had been well-planned. Micheál and a tight group of confidants knew over a week ago that he would reveal his position on Thursday. There was strict secrecy. They knew that if he informed his parliamentary party, there would be the inevitable leaks to the media. This would give groups both within and without time to mount a counter-campaign and weaken the message.

When the speaking slots were offered for Thursday, Micheál Martin’s name purposely wasn’t put down, even though he had been working on his speech for the previous two days.

“Some people in Fianna Fáil have been orchestrating very strong opposition to any change of any sort. They packed the room last year at the ardfheis when they heard the London Cumann had put in a motion calling for the repeal of the Eighth,” said one supporter, who believes the prevailing party view on abortion is now far more nuanced than what was said by the campaigners in the RDS.

For some, still pleading ignorance is no longer an option when trying to remain as vague as possible if asked what they think should happen if the Eighth Amendment is repealed

Apparently he spent much of the Christmas break reading and rereading transcripts from the proceedings of the Citizens Assembly and the Oireachtas committee. He took a huge volume of documents home when the Dáil adjourned and then, on December 28th, he requested further material from his staff.

“He knew what he wanted to say, but was apprehensive about the significance of his actions in the run-up to Thursday. But he was fine once he settled and was comfortable with his decision.”

In his speech, Martin said the amendment “has been shown to cause real damage to Irish women. Because it has caused real harm to the quality of care available to pregnant women at critical moments. Because it has not and cannot change the reality that abortion is a present and permanent part of Irish life.”

Emails, congratulatory and condemnatory, poured into his Dáil and constituency offices on Friday. On Thursday night, Micheál attended his party’s national executive meeting in Leinster House. There was a “calm” exchange of views, with opinion fairly evenly split between those who supported his stance to those who “thought Fianna Fáil is a pro-life party”.

Those of his party colleagues who would be seen as “pro-life” campaigners were caught by surprise by the Thursday speech. Former senator Jim Walsh, a deeply conservative politician from Wexford who opposed civil partnership and marriage equality, was spotted on Thursday in the Leinster House 2000 annex, where Fianna Fáil politicians have their offices. He must have been flummoxed.

Meanwhile, serving TDs and Senators have their free vote on the issue. They don’t have to side with their leader’s view. They must remain true to their conviction.

And they can do this while being well-informed.

This Christmas, Fianna Fáil politicians left Leinster House with a raft of literature. On December 20th, they were sent transcripts of both sets of hearings, along with the committee’s final report.

So for some, still pleading ignorance is no longer an option when trying to remain as vague as possible if asked what they think should happen if the Eighth Amendment is repealed.

Like their leader, those TDs and Senators who support holding a referendum but are against allowing abortions in the first 12 weeks of pregnancy will have examined the transcripts before reaching their conclusion. Because that’s their job.

That is their prerogative. They will be able to vote according to their conscience. As will Micheál Martin.

He is a courageous politician. He has bottle. And he has demonstrated leadership.

1 How one couple’s weekend away resulted in 30 Covid-19 cases
2 Taoiseach tells TD to ‘cop on’ over criticism of contact tracers asking about pubs
3 Miriam Lord: Government’s latest comedy of errors offers little to laugh about
4 Coronavirus: 429 new cases as vigilance urged amid rises across the country
5 North: 424 new cases of coronavirus in highest rate since start of pandemic
Real news has value SUBSCRIBE