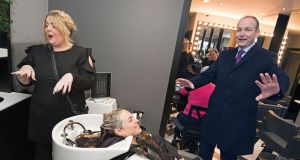 So the leader of Fianna Fáil walks into the back room of a charity shop in Phibsborough, startling the woman putting clothes onto hangers.

Not a bad quip from Micheál Martin, who spent the morning in Dublin Central with Mary Fitzpatrick, the Fianna Fáil candidate who never gives up. Fitzpatrick narrowly missed out on a Dáil seat at the last general election when she enjoyed the unfamiliar luxury of fighting a campaign on just one front. In the past, when this part of the city was Bertie Ahern’s manor, she may have shared the party ticket with him but his famous Drumcondra mafia never allowed her a look-in.

She is back for a fourth attempt and this time, with an extra seat in the north city and two key areas of her support base returned in the redrawn constituency, the party has high hopes for a Fianna Fáil gain in the crucial Dublin battleground.

They started the second part of their mini-canvass at Phibsborough Shopping Centre with Micheál buoyed up by his earlier discovery of a butcher’s shop selling black pudding from Cork. “A butchers shop in the middle of Cabra. McCarthy’s black pudding. From Kanturk!”

He couldn’t have been more excited had Seán Haughey materialised at his shoulder from next door in Dublin Bay North to assist with the glad-handing, what with the remainder of his crack team of front bench heavyweights otherwise engaged at campaign headquarters with a press briefing on Brexit and the economy.

Lisa Chambers (Brexit) and Michael McGrath (finance) coped very well in the absence of their colleague Haughey, who is Simon Coveney’s shadow in foreign affairs. In fact, the pair of them are so good it seemed Seán’s presence wasn’t required. Lisa said she thought he was out canvassing.

Deputy Haughey was unexpectedly elevated to the front bench last October when Niall Collins had to be stood down in disgrace for standing in for a colleague during Dáil votes.

Anyway, he wasn’t with Micheál either for the walkabout in Phibsborough where the highlight was a long chat at the bananas in the fruit ‘n veg section with Tesco team leader Colm Gannon, who informed him he has no intention of voting for the Government.

“Leo was going to look after the people getting out of the bed - you know what I mean? He gave us a fiver last year. We got a fiver.”

Colm, whose wife works in Holles Street hospital and is taxed to the hilt, isn’t feeling the benefit of the upturn very much. Micheál and Mary were all ears.

“All my family - I’ve a big family, a huge family - and we were all Fianna Fáil, my father was Fianna Fail, so what are you doing to get me back to Fianna Fáil?” asked the Tesco man.

“Well, first of all, housing, right,” began Micheál. “That’s going to be our major priority at all levels.”

“A 100 per cent, we shouldn’t have that garbage going on,” agreed Colm. “I don’t mind paying tax. No-one minds paying tax if they’re getting…” He paused.

And Micheál was there: “….in the health service.”

Then it was back to housing. Colm had plenty to say on that, like how he lives in Ringsend beside the derelict Glass Bottle site. “We’re all waiting to see what is going into it, I mean, there’s enough room there for 2,000 houses but the developers want it to be private housing, so what’s for the local people in Ringsend and Irishtown - my kids can’t afford to live in the area where we’re living.”

Then there’s the homelessness. His son was playing a match over in Clontarf at the weekend. “Playing at 10 o’clock last Sunday morning and at the bushes onto the Alfie Byrne Road there was all tents. I couldn’t believe it, there was a corner kick being taken - tents in Clontarf where the GAA pitch is. That can’t be right, 10 o’clock in the morning. Bitter cold. That’s not right. Bitter cold.”

Colm told us later that the Minister for Finance only lives up the road from Tesco.

“He’s in here all the time. Oh, I’ve asked him. I’ve said, Paschal, c’mere and I tell you, you promised us money and you gave us a fiver out of two years. You’re blaming Brexit on all this. I mean, who cares about England, know what I mean? We’re all worried about what’s going on over here, we’ve all got kids to pay for.

“The Government should be saying: hang on a minute, we’ve enough people and countries in Europe. You can bargain with them.”

Further along the aisles, Micheál buttonholed two women at the crisps and snacks. They looked a bit taken aback. He’s an old hand at this sort of thing and can’t be embarrassed.

The women eyed him, nodding slowly and smiling cautiously.

“Mary Fitzpatrick,” he said, as if introducing a fabulous new brand of crisp. Mary beamed at them.

Then he pointed to the crisps again. “But seriously, they’re very good.” And then he darted away.

As they stared after him we wondered what they made of this unexpected encounter. “Well, at least he’s trying to do something, to be honest with you,” said one of them. Oh, and what’s that?

“Trying to promote his business, I suppose.” She thought he was a company rep for Keogh’s crisps.

Back outside, fast moving Micheál went from shop to shop, showing the face, pressing the flesh, Mary Fitzpatrick loudly bringing up the rear. The young party workers with him wore “An Ireland for All” jackets recycled from four years ago - green for the lads and pink for the girls.

He bustled past a man begging on the street and then bustled back to give him some money, unfortunately knocking over the cup of coffee on the ground beside the man as he raced for the next entrance.

He barrelled into “La Mode”, an award-winning ladies’ hair and beauty salon. No shame. We still cherish the moment Enda Kenny charged into a sex shop in Limerick and cheerily pummelled horrified customers.

As she is a woman, Mary Fitzgerald took the lead. The nearest customer was getting her hair coloured and opposite her was a women getting her hair rinsed. Head back in the basin, eyes swivelling up at the approaching horde of cameras and beaming politicians.

“Do you want to say hello?” boomed Mary to everyone. “I’ve Micheál Martin here, just in to say hello.”

They’re a game lot in La Mode. Not fazed at all. “You can get your colour done here,” said the woman with the solution on her head. “I need it,” trilled Micheál. “I can tell you the price is very good,” she told him. “Value for money here!” cried the Fianna Fáil leader, before he saw the woman with her head in the sink and the woman further up having her nails done.

“I’d get the full Monty here I’d say,” he declared before focusing on the woman trapped with her head in the wash basin.

“I’m Mary, how are you!” warbled the candidate.

It was all very happy. Dezirae Stephan, who had been getting her hair washed, said afterwards she didn’t mind the intrusion. It was good fun. Born in the United States, she won’t be able to vote. “I’m not an Irish citizen yet but hope to get the invitation for the next ceremony in March”. If she could her concerns would probably be “local issues” and “homelessness would probably be the main one”.

Health conscious Micheál rounded off his flying visit with lunch - a big salad, “no coleslaw please”. He confessed it’s his wife and son who love the Keogh’s crisps.

Public funds of €25m sought for Dublin library 01:38
Airport operation to block Albanians, Georgians from claiming asylum is ‘scaled back’ 01:33
Over 2,000 buyers bid for first affordable homes planned for south Dublin in years 01:32
Dublin City Council says there are too many bus routes on the same streets 01:09
Disability service residents may receive over €1m in refunds over ‘inappropriate’ spending 01:08
SUBSCRIBER ONLY