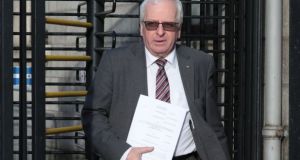 Mattie McGrath, it seems, was the only one making that case at the Business Committee, for a move back to Leinster House. File image: Collins Courts

Time after time, meeting after meeting, he begged for a return to Kansas (or Kildare Street, as it’s better known) but his impassioned pleas for support fell on deaf ears.

Nobody moved to help him, even though Mattie’s fellow politicians wanted nothing more than to escape this strange Convention Centre place and return to the comforting confines of Leinster House for evermore.

But they were afraid.

For the experts confirmed what they had long suspected — that TDs are special and must cocoon like the old folk, but in a more extravagant and expensive way and in full public view. They cannot leave themselves open to possible risk the way ordinary mortals must do while going about their daily business in a sensible manner.

Back in May the HSE’s chief clinical officer was asked at the Dáil’s Covid Committee if the advice issued to TDs on guarding against the virus in the workplace was the same as the advice given to workers in other areas of society. At the time, politicians were looking around at the yawning gaps in the chamber and wondering if they really needed to be socially distanced to such a degree.

“There is no blanket advice given to every single setting” was the cautious answer as an enormous safety blanket was thrown over the denizens of Dáil Éireann. This careful cosseting did not sit well with most of them, but they didn’t want to go against the experts’ recommendations, even when the elaborate measures increasingly screamed that, while all people are precious, some are more precious than others.

Since the Dáil decamped to the Convention Centre for selected sittings, the verdict on the venue from deputies on all sides has been extremely negative. They hate it, for a whole variety of reasons – including expense, inconvenience, cavernous size, lack of atmosphere, the loss of a sense of a parliament in action and grub - which doesn’t compare to what is available in Leinster House.

There has been lots of muttering about the unsuitability of their temporary lodgings, with Fianna Fáil’s Marc Mac Sharry loudly banging the drum over the last few months and saying what most of them think.

But Mattie McGrath, it seems, was the only one making that case at the Business Committee, where decisions are made.

With the Dáil sitting in Leinster House for two days this week, frustration with the new split living arrangements boiled over after Sinn Féin’s Matt Carthy opposed the proposal to decamp across the Liffey on Thursday for the final day of business.

Why can’t TDs just find a yellow brick road back to Leinster House?

He sees parents waving off their children on school buses and people going back to work in meat factories and other places and yet the Dáil can’t come up with a proposal to get themselves permanently back to work in Kildare Street.

Meanwhile, he declared, the Government has been able to produce guidelines which will allow more people sit in the Dáil bar than in the vastly larger Dáil chamber.

It is time for the Business Committee to come up with a solution to end this “crazy” and “ludicrous” stage of affairs, he thundered, to the silent assent of the socially distanced few around him. Apart, that is, from Mattie McGrath, who took grave umbrage at the TD for Cavan-Monaghan’s brazen swiping of his ruby red slip-ons.

Where was Matt Carthy when he - Mattie - was the only one at the committee clicking his heels and extolling the virtues of home? Where was Sinn Féin when he was passionately arguing for a return to Kildare Street?

“Grandstanding in the extreme!” Mattie roared. “Grandstanding by Sinn Féin. This is brass hypocrisy. It’s shockin’. Shockin’.” At last week’s Business Committee, when he called for the abandonment of the Convention Centre and a full return to Leinster House, Sinn Féin didn’t support him.

Carthy smirked across him. “You’re just making stuff up now.”

“I am not! Fact… Fact!” bellowed McGrath, incensed, as Mary Lou McDonald needled him from her seat across the aisle. The pair of them hissed at each other from either side of the stairway as Richard Boyd-Barrett joined the call for an easing of the strict social distancing arrangements in the chamber with the fascinating observation that it costs 50 times more to provide public health protection for a TD than it does for a school pupil.

The Ceann Comhairle had to point out that, in its last meeting at the end of July, the Business Committee had a chance to change the way the social distancing is enforced but the members “in fairness, with the exception of deputy Mattie McGrath” went along with the expert advice.

“Thank you” said Mattie, with a vindicated glow.

The Taoiseach was dragged into the discussion. It’s nothing to do with the Government, he said, although everyone agrees that Leinster House is far more agreeable and amenable. He’ll abide by whatever decision is reached.

In the end, with Matt and Mattie sniping at each other in the background, it was agreed that the committee will meet within the week to consider possible solutions. A division was called and hostilities resumed at the back of the chamber, off camera, as they waited to vote.

“Short bell,” cried the Ceann Comhairle, wanting to get the issue over with as quickly as possible.

“You’re a political bluffer,” shouted Pádraig Mac Lochlainn, looking over at Mattie McGrath. “Everyone knows it.”

McGrath left his seat and went to the back for a confab with Michael and Danny Healy-Rae. Mac Lochlainn, the Sinn Féin whip, marched around the railing, spoiling for a confrontation. “What proposals have you put to address the public health concerns?” he repeatedly asked.

Mattie loudly fought his corner, but in his excitement his words were unintelligible to journalists eavesdropping above him on the press gallery.

“Your strategy is to be dishonest every week. You’re the most dishonest TD I’ve ever seen in all my nine years in here,” roared Mac Lochlainn, as Mary Lou and Matt Carthy watched on, fascinated, from a few rows down. “Completely dishonest.”

Mattie yelped angrily and began shaping like a man who was about to ask his pal to hold his coat. “Shhhh!” went Michael Healy-Rae as his brother Danny chuckled. But there was no stopping Mattie. “Shush! Shush!” repeated Michael, glancing up at the journalists.

The vote to abandon the Convention Centre sitting was lost. “Welcome aboard, Mattie” smiled Matt at the still fuming Tipperary TD, noting they both voted against.

With a fair wind and a bit of luck, they might get around to new working arrangements next week. But they will have to agree to a one metre distancing rule first, pointed out independent TD Thomas Pringle.

Astonishing, how the combined brilliance of the 160 members of the Dáil cannot come up with a proposal for their own place of work.

You’d be afraid for us, sometimes.