Miriam Lord: Labour’s gifts to the altar at manifesto launch 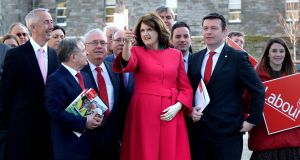 Looking for a shot at redemption, Labour took itself to church. The party is in a bad place. So they picked a good place to start the fightback.

“It’s going to kick off, I believe intensely, from today,” predicted Alan Kelly, in what may or may not have been a threat in advance of his appearance on TV3’s deputy leaders’ debate.

All the main parties chose very nice locations for their manifesto set pieces. The meeting room of the Royal Irish Academy (SF), the Wood Quay Venue in Viking Dublin (FF) and CHQ, a modernised warehouse on the banks of the Liffey (FG). But Labour, with the last of the launches, trumped them on the atmospherics front.

The 166-year-old St Laurence’s church on the DIT campus in Grangegorman, now a multi-purpose space (they still hold religious services there), was the real deal, right down to the pews, leaded windows, and choir gallery with handlers skulking above the Stations of the Cross.

The politicians and support crews trooped in, Joan Burton leading the way, ready to lead them in a reading from the Good Book of Labour, their manifesto – “Standing Up for the Future”.

But first, they genuflected in front of The Blessed Joe Costello, the local TD who, with Michael D Higgins, was behind the initial decision many years ago to relocate the Institute of Technology to the Grangegorman site. An inspired move, as it now turns out.

A faint aroma of incense hung in the air.

The Tánaiste, her deputy leader, Kelly, and Minister for Public Expenditure and Reform Brendan Howlin, concelebrated a solemn service of the document.

Kelly was first up.

“Sacred Heart of Jesus, have mercy on us.”

This could very well have been uttered by his two platform companions. But it was the inscription on a stained glass window behind the altar.

Looks like a busy election ahead for them, so. St Dymphna, by the way, is patron saint of nervous disorders.

“The Labour Party entered government in 2011 with its eyes wide open,” said Kelly, setting out the narrative of a heroic party accepting the challenge of becoming a minority government partner in a time of crisis, mindful that it might not make it out the other side.

Now, as they leave that Government, those eyes look like they’ve had a nasty argument with Conor McGregor, and he’s not the one with the busted lip and two painful shiners.

Labour’s campaign has been uncertain and lacklustre. Yesterday morning, with a particularly robust contribution from Howlin, there was a sense that the party is finally upping its game.

Even that infamous Tesco-style advert from the last election, warning of specific Fine Gael cuts and charges if they were allowed to govern alone, was broached.

Howlin claimed they delivered on 95 per cent of their promises, including many, such as marriage equality, which Fine Gael wouldn’t agree to in their initial negotiations for government. They got their “big ticket” items.

On the constant charge of “broken promises”, if people were “objective, as opposed to trite” about them, they would see this. “If you want to say there’s an ad and we didn’t fulfil every bit of it, of course, you could come to that conclusion.”

During the launch, Labour was careful not to attack Fine Gael, while pointing out that the two parties are different in terms of ideology.

The Tánaiste was conscious of her surroundings, having grown up near the church. Grangegorman, a psychiatric hospital feared by many Dubliners at the time, “was once a place of sadness and despair in my childhood”, she told her congregation. But today, the place stands for transformation. “It is now a temple of learning.”

Its purpose is “to give new life to an old institution”.

Which, coincidentally, is also Labour’s purpose in this election.

Might not this be a stumbling block to working again with Fine Gael? (All supposing Enda Kenny doesn’t do a moonlight flit with Micheál Martin.)

The Tánaiste returned to Labour’s role in bringing about the marriage equality referendum. “I’m very confident, because of the way we worked with Fine Gael, that we will have a referendum.”

Howlin, meanwhile, who must have had an extra couple of Shreddies for breakfast, got stuck in to the Opposition.

He declared Gerry Adams doesn’t want to be in government – “and frankly, what I heard of his interview yesterday, that’s just as well” – because he wants to make Sinn Féin the main party of Opposition.

Then Howlin went in, studs showing, with a vicious tackle on the Fianna Fáil leader. Micheál Martin might be defending his last government now, he declared, but he “abandoned” it in 2011.

Unlike St Laurence O’Toole, he wasn’t inclined to show any mercy. Even glassy St Dymphna appeared to wince.

There was a simple marble altar at the top of the old church. Nothing on it. Labour will hope it remains that way.

It seems they’re not ready to be sacrificed just yet.