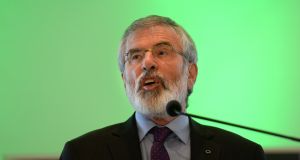 Phew! Thank heavens for that. He kept us on tenterhooks right to the end.

It was touch and go for a while and could have gone either way, but Gerry Adams’s loyal admirers piled on the pressure, working tirelessly on their hero in the lead-up to Sinn Féin’s annual pre-Dáil term away-day conference.

By yesterday morning, the tension had become unbearable. People were forced to endure until the penultimate page of what party headquarters advised would be “a significant address” by Adams. Some guests in the City North Hotel probably attributed the strange rattling noise in their vicinity to planes coming in to land at nearby Dublin Airport, but it was just the sound of Sinn Féin and media knees knocking.

A few minutes after 10am, we were all put out of our misery and got a decision.

“I will be allowing my name to go forward for the position of Uachtarán Shinn Féin.”

The sense of relief was so overwhelming that everyone almost kept a straight face and journalists nearly rushed from the room to file the news.

Gerry had courageously declared he would stand again for the party leadership, an office he has occupied, unchallenged, for the past 33 years. Later in the afternoon he outlined the scale of the challenge facing him at November’s ardfheis in the RDS.

“Anyone is free to put their name forward,” he said in Irish, clearly anticipating another white-knuckle ride in the leadership stakes. “There is no change in that.”

True enough, anyone has been free to stand against Gerry since 1983. It’s not his fault that nobody has.

However, having triumphed in the cauldron of electoral walkovers for more than three decades, Sinn Féin’s perpetual president gave firm indications last year that he doesn’t intend to go on forever. Back then he publicly contemplated the possibility that he might have to start thinking about not allowing his name to go forward for consideration.

The late Martin McGuinness was a great help in this regard. “Gerry and I have had our own discussions about this and he made it clear yesterday – we are a party in transition, and I think it’s sensible that we are,” he said last year when the leadership question was mentioned.

Twelve months ago at the same venue in Meath, the two men hatched “a plan” to manage the succession. It would involve “reaching” to the grassroots in a comprehensive fashion as part of a 10-year plan for the party’s future.

This blueprint is now over a year on the drawing board and should be ready in time for November.

At the ardfheis, all will be revealed. It sounds like an exciting changeover strategy. One senor adviser described it as an event where “our transgenerational teams will be outlined.”

It sounds like lucky supporters will be treated to a front row seat at the premiere of Sinn Féin: The Next Generation.

In his speech to Sinn Féin’s elected representatives, the perpetual president was modest to a fault, sticking in a completely unnecessary caveat when he addressed his future intentions.

“If elected, I will be setting out our priorities and, in particular, our planned process of generational change, including my own future intentions.”

“Tell us now!” pleaded the reporters. But no, Gerry wouldn’t do that. He has a duty to party members to tell them first, and that’s only if they should decide to elect him again.

It must be a big worry.

Supposing he gets the thumbs-up for the 34th time, he can tell them that he has decided to step down when the time is right.

A Groucho Marx song would be appropriate at this juncture. It’s brief and to the point: Hello, I Must Be Going.

This will the high point of the plan “for orderly leadership change” that Martin and Gerry agreed upon last year.

Sure there’s no fun in that.

Although – and Gerry wants to be clear on this – he will be leading Sinn Féin into the next general election. “That is my intention,” he stressed. On the other hand, he wants people to hear what he has to say at the November conference

“The plan which we have been collectively working on is proceeding and the next staging post in that is this next ardfheis.”

Will things be wrapped up after that? Nobody knows; the future looks fuzzy. It didn’t help that there was some mention on the sidelines yesterday of a second conference, perhaps next spring, which might further handle the sensitive issue of managing Gerry’s exit.

But for now, Sinn Féin is busy putting out the message that the party is primed and ready for government action both north and south of the Border.

“Contrary to the bogus argument being put out by some, it is self-evident that Sinn Féin is fully committed to the power-sharing institutions,” declared Adams. However, participation in the North is not possible “in the face of disrespect” from the DUP.

The media, meanwhile, was most interested in the leadership question. The pretenders are watching their words, happy to stress that it is not an issue because they are still delighted with the present incumbent. Mary Lou McDonald, the hot favourite to take over, said in interviews that she doesn’t want to be “ordained” or “anointed”.

Pearse Doherty is keeping his powder dry, perhaps scoping out the numbers he might get in a contest.

The away day puttered along slowly in a series of “workshops” and panel discussions. The party got on the evening news and the perpetual president was photographed in the middle of a line of female politicians.

And most of all, everyone heaved a sigh of relief at the news that Gerry had finally given in and allowed his name go forward again for the leadership.