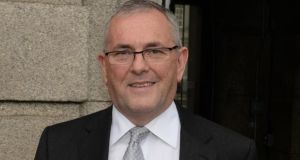 John McGuinness, Fianna Fáil’s senior man in the Carlow-Kilkenny constituency, has jetted off to the Canaries for a week in the sun as the party’s byelection campaign is getting into gear. Photograph: David Sleator

The Government fired the starting gun for the Carlow-Kilkenny byelection on Wednesday. It’s all hands to the pumps for the political parties.

Except in Fianna Fáil, where John McGuinness, the party’s senior man in the constituency, has jetted off to the Canaries for a week in the sun.

The long-serving TD and former minister of State, who likes to portray himself as keeper of the Fianna Fáil conscience and heir to the mantle of great leaders past, talks like a fella who would gladly take a bullet for his party.

If it doesn’t damage his media profile.

In fairness, McGuinness is an unfortunate victim of circumstance. Journalistic ears always seem to be in the vicinity when he is regularly moved to criticise Fianna Fáil and its leadership.

Which is rotten luck.

It’s not great luck for Micheál Martin either.

The Fianna Fáil leader has enough on his plate trying to combat the march of Sinn Féin on one flank without having to deal with the march of Mé Féin on the other.

There was much talk at last week’s ardfheis about McGuinness’s constant sniping from the sidelines. It has become a source of frustration to most colleagues in the parliamentary party.

They found his latest intervention before the annual set piece particularly irksome. McGuinness’s main contribution to the traditional morale booster was to attack the party for rushing out policies ahead of the ardfheis.

“He likes to bang on about accountability and what we could do better in terms of policy, but he doesn’t do much to contribute any ideas,” said a colleague.

There was no sign of McGuinness in the Dáil this week. He wasn’t in the chair at the Public Accounts Committee either. Fine Gael’s John Deasy deputised for him at Thursday’s meeting.

Away on a holiday, said party sources. They couldn’t confirm if it was in Tenerife or Lanzarote, but it was “somewhere nice”.

We hear there was “a lot of rolling of eyes” in the party when they heard at the beginning of the week that McGuinness had flown the coop.

The party is throwing everything into the byelection on May 22nd.

Former TD Bobby Aylward is favourite to win the seat vacated by Phil Hogan but Government deputies are putting it about that relations are reportedly strained between sitting deputy McGuinness and the candidate.

When the writ was moved in the Dáil, Micheál Martin talked about Fianna Fáil’s strong showing on the doorsteps.

“It’s extraordinary, at the best of times, that a senior TD should take time off during a byelection in his constituency. But this particular one is hugely important for the party,” said a colleague yesterday.

“It’s not like the Government sprung a surprise. We’ve all known for months when this was going to happen. I just can’t get my head around it.”

There is no rule in Fianna Fáil forbidding TDs to go off on holiday while the Dáil is in session. But, as one member put it, “There’d be an expectation that you’d stay around the place.”

Then again: “John is John.”

No doubt McGuinness, suitably rested and refreshed, will throw himself wholeheartedly into Aylward’s election effort when he returns.

Fine Gael’s Patrick O’Donovan wins quote of the week for this swipe at Fianna Fail during discussion of his coalition’s overhyped spring understatement.

Seán Fleming (FF): “The Government chose to fill this week’s Dáil schedule telling the country how wonderful it believes it is. This sets a new world record in backslapping.”

Politicians have an irritating habit of promising all sorts of things during an election campaign and then failing to deliver once all the votes are in the bag.

For maximum return, it’s a good idea to extract as much as possible from them before the polls close and the parties lose interest.

Full marks so to Carlow-Kilkenny constituents Anne Cody and Alva Fitzgerald for taking advantage of the ongoing campaign by organising a novel byelection table quiz.

They are hoping to raise money for the L’Arche and Camphill centres in Kilkenny and Tír na Nóg in Carlow – organisations that provide high-quality, person-centred respite and day-care for children and adults with learning disabilities.

It’s a constant struggle to find the money to keep these facilities in line with stringent Hiqa operating standards.

The two women have asked all 13 candidates to prepare a list of questions for the quiz and then read them out on the night. This may prove difficult for some of them as all questions have to be nonpolitical.

They won’t be allowed to put posers such as: “Which candidate for X party is a dirty, double-crossing excuse for a human being?” Or: “What candidate from Y shots puppies and kittens for sport?” Or: “When did candidate Z last put their hand in their pocket to buy anyone a drink?”

Furthermore, as more than 200 people are expected to attend the quiz in Kilkenny’s Springhill Hotel next Thursday, should candidates make their questions easy or hard? Too easy might annoy people and too hard could cost them votes.

Candidates will also have to surrender their mobile phones if they wish to compete, as is the norm in table quizzes these days. Perish the thought they might be caught Googling answers to make themselves look smarter.

Anne and Alva tell us tickets are still available at the hotel – €40 for a table of four.

Meanwhile, in referendum land, an unusual event is taking place in Dublin on Monday in support of the Yes Equality Campaign.

It’s called “Hounds for Love: a Pet Project in support of Yes Equality.”

The organisers are inviting people to take part in a walk (short stroll) from Sandymount to the Merrion Gates. Dogs should be kept on a lead and owners are asked not to forget water and litter bags. It’s an informal event organised by a group of dog owners in Dublin 8 and they say those who don’t own dogs are also welcome to join the fun.

Doggie outfitters Mutt Ugly have provided colourful bandanas for the little darlings and some owners who have already signed up are bedecking their pets in home-made costumes.

Walkers are gathering at 12.30pm at the first car park, the one with the palm tree sculpture. It’s free to take part but a voluntary donation to Marriage Equality to fund the poster campaign wouldn’t sneezed at.

Breathless and rearing to go, the Seanad is due to discuss its future on Tuesday.

They are wildly keen on reform. At least that’s what they said before and after the referendum to abolish the Upper House.

And it’s only been, er, weeks since the Working Group on Seanad Reform published its much-anticipated report.

Given our Senators thirst for meaningful change, one would have expected them to have been thoroughly exercised by the fascinating contents of this comprehensive document the minute it landed.

Their wide-ranging proposals include votes for Irish passport holders abroad and residents in Northern Ireland and a major overhaul of the Seanad election process.

They have a draft Bill in the pipeline which they say could be passed by the Oireachtas and signed into law before the year is out. This would mean the next government would have to act on it.

When their beloved Upper House was in danger of extinction, Senators promised radical change if it voters allowed it to survive.

They now have the blueprint to do just that

But the Upper House remains strangely quiet about it. Apart from one or two Senators such as Ivana Bacik and Feargal Quinn, there has been little comment.

And hardly a peep out of them on the proposal to cut the number of Senators elected by county councillors and national politicians from 43 to 13.

Since the publication of the report, Senators have been love-bombing the councillors of Ireland with impassioned speeches cherishing their work and insisting they should be better paid.

Never mind all those councillors who were elected last year on pledges not to take expenses and the like.

The Seanad’s newest member, Gerard Craughwell, is leading the charge to butter them up, with the likes of Paul Coghlan and others falling over themselves to praise local representatives.

At one stage recently, tributes were paid in the chamber to a Roscommon councillor whose nephew was elected president of Macra na Feirme.

This is because the old-school system for electing Senators will still be in place for the next election, so councillors have to be schmoozed in the old fashioned way by those Senators seeking re-election.

As for those proposals, Maurice Manning and Joe O’Toole will appear on Tuesday to run through them. We trust they will have a full house for their presentation and the subsequent discussion.

Then the true test of the Seanad’s commitment to reform will be if they pass a motion proposing that government steam ahead with the working group’s proposals as soon as possible.