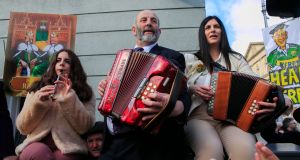 Outside Leinster House it was like the prelude to a boyband concert. A high-spirited crowd, dressed to the nines and giddy with excitement, held homemade banners and placards, occasionally bursting into song and sometimes bursting into tears.

The Order of Malta was on duty.

Oireachtas ushers issued green wristbands at the top of a queue. The lucky ones squeezed through the door and greeted family and friends already on the other side with delighted hugs and kisses.

There was a bottleneck at the gates. On the overcrowded footpath, new and re-elected TDs milled about with their supporters, soaking up the atmosphere. In the middle of this chaos a smiling man in a suit was parked, prostrate, on a hospital trolley, hooked up to a “drip” and doing what appeared to be a radio interview on his phone.

This was Seán O’Leary, who stood (lying down) unsuccessfully in 11 constituencies. His unique campaign involved canvassing from his trolley to highlight issues of national concern.

The Healy-Rae people were getting more and more excited. Every so often Sean revved up the pipes

With an hour to go to the start of the 33rd Dáil, the pace picked up on the pavement with news of the imminent arrival of the Healy-Raes.

Piper Sean Whelan from the Killorglin pipe band waited for brothers Michael and Danny to make their entrance. This was his second event at the Dáil with the victorious Healy-Raes. “Four years ago I was up on the Pajero.” This time the celebrations were more low-key – no dancing on the bonnets of SUVs.

Piper Sean, who was with his wife Mary, gave the crowd a blasht of The Foggy Dew to keep the party going. In the absence of the Healy-Raes, Sinn Féin’s new Dáil contingent mustered outside Buswells Hotel on Molesworth Street and prepared for yet another victory march en masse to the plinth. In the meantime, Green TDs and husband-and-wife team Catherine Martin and Francis Duffy ushered their children through the simmering throng.

It was sunny and everyone was in good form. Suddenly cheers rang out from a group of people escorting a new TD across Kildare Street. Their placards featured the word “Pick” above a photo of a large blueberry with “For Port” written beneath.

They were part of a 20-strong group which travelled for the first day with Cathal Berry, the former army officer who won a seat in Kildare South. His base is Portarlington. “Our first TD in Port for 93 years. That was John F Gill in 1927,” explained a supporter.

All the while, the Healy-Rae people were getting more and more excited. Every so often Sean revved up the pipes. Richard O’Donoghue, the first Independent TD elected for Limerick County, rolled up in a vintage 1956 Plymouth.

Then the Shinners made their move. They were stretched across one lane of traffic; party president Mary Lou McDonald and her deputy leader in the Dáil, Pearse Doherty, front and centre of the pack.

They walked the short distance to the gates, stopping the traffic and sweeping all before them. A large bank of photographers and journalists awaited at the end of the plinth inside the main gates.

The TDs broke free from the arms of their cheering comrades and reassembled in front of the automatic traffic barrier once in the Leinster House car park, facing the cameras.

Then a handler shouted: “Turn around and look at THEM!” The TDs swivelled to face their cheering supporters. “A great day for Irish . . .” shouted one of them, before her voice trailed off, “eh, peace.”

A large crowd attached to Michael Collins from Cork South-West, an Independent member of the Rural Alliance, reeled around the corner

Once again, Mary Lou’s parliamentary party turned to face the cameras. With their backs to the barrier, they couldn’t see former Sinn Féin TD Peadar Tóibín, now Aontú leader, driving through the gates and straight towards them.

In all the mayhem, nobody noticed Danny Healy-Rae striding purposefully from the car park to the road, a button accordion slung over one shoulder. He passed Fianna Fáil’s James O’Connor, at 22 the youngest TD in the Dáil, holding forth confidently on camera to a reporter.

The Kerry maul, meanwhile, was moving across Kildare Street to the side door of Buswells. To loud cheers and a few toots from a tin whistle, Danny Healy-Rae hooshed himself up onto a large traffic control box, where he sat for some time, belting out the tunes. His brother Michael was hefted onto an adjoining box and they were joined by an assortment of Healy-Raes, the tin whistle, two accordions and a small child.

“Up the Kingdom! Up Kerry! Up Kilgarvan! Huh-hooo!”

A large crowd attached to Michael Collins from Cork South-West, an Independent member of the Rural Alliance, reeled around the corner at the same time. “Up Collins! Up the Rebel! Come on Cork!” they roared.

On the dot of 11.30am the Kerry contingent gave voice to a respectful rendition of The Rose of Tralee.

Back at the gate, a distracted looking Richard Boyd Barrett was talking anxiously on his phone. “Bríd and Gino, I don’t know where they are,” he was telling somebody. His two People Before Profit colleagues made it into the Dáil on time, Bríd Smith with Gino Kenny wearing the Palestinian scarf he wore to his first Dáil sitting, four years ago.

The Social Democrats – they haven’t stopped smiling since Catherine Murphy and Róisín Shortall tripled the Soc Dems’ Dáil strength – avoided the early madness by having tea and buns for everyone in nearby Davy Byrnes pub. Their TD Gary Gannon got a lucky omen when he walked through the gates of Leinster House – a bird dropped a poo on his jacket.

Fine Gael’s youngest TD, Emer Higgins, made quite a stir when she arrived after taking the number 25 bus from Lucan.

Inside, the ushers were hard pressed keeping the corridors clear. The canteen, bar and restaurant were packed. The public gallery was packed for the midday start, with much waving from below to above and vice versa.

The speeches went on, and on, and on. As expected, nobody emerged as taoiseach

On the Sinn Féin benches, Mary Lou McDonald stood out in vibrant green. Later, her proud mother Joan – wearing orange – would be in the public gallery to see Mary Lou’s colleagues propose her daughter for taoiseach. New Sinn Féin TDs Violet-Anne Wynne and Réada Cronin, who found themselves embroiled in controversy over past social media posts, sat together in the quadrant now fully occupied by the enlarged Sinn Féin party.

Or the Fourth Green Field, as that section of the chamber may now be known.

The outgoing (soon to be reinstated) Ceann Comhairle sat high up in a corner, where Mick Wallace used to sit, and he looked very nervous. As the time came for the vote on his job, Seán Ó Fearghaíl did some turbo thumb-twiddling. He need not have worried. He was elected by his peers by the proverbial country mile. His only opponent, Independent Denis Naughten, took defeat well.

During that voting, conducted at the upper rear of the chamber, Tánaiste Simon Coveney, and then Taoiseach Leo Varadkar, crossed the floor to shake hands with Verona Murphy (who was bumped from the Fine Gael election ticket) and her fellow Independents.

The House rose for a few hours before the nominations for taoiseach got under way. Everyone knew this would be a futile exercise, and so it was.

The Fianna Fáil leader held a press briefing on the freezing plinth to the accompaniment of megaphone-assisted roars from protesters outside the gates. Micheál and his colleagues did the en masse march to the microphones; this time they split into two groups and came from two directions, before merging before the media.

Danny Healy-Rae – who has controversial views on climate change – came out later to say a few words and it snowed on him. Paschal Donohoe, the Minister for Finance, was above all the political fever. “I spent my first afternoon for a long time yesterday making a curry from scratch.”

Inside, the Deputies took turns to big up their nominees for taoiseach. Norma Foley lauded Micheál Martin to such an extent that the only thing she didn’t credit him with doing was inventing a cure for the common cold.

The speeches went on, and on, and on. As expected, nobody emerged as taoiseach.

After the votes, the distance between Sinn Féin and both Fianna Fáil and Fine Gael, not to mention the hostility, seemed a bridge too far. Micheál Martin was particularly vitriolic in explaining why his party will not coalesce with Sinn Féin.

As it stands, the grand coalition seems the only option, and even that seems shaky. For all the earlier celebrations, there was an air of pessimism in the chamber.

This story is just beginning.