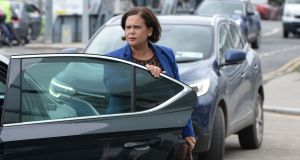 Thanks to Mary Lou McDonald, the identity crisis at the top of Government infected Leaders’ Questions, despite Tánaiste Leo Varadkar, with supreme discipline, managing to keep out of the headlines for a whole day.

Nonetheless, Taoiseach Micheál Martin asserted himself after a series of peppery exchanges with a theatrically disdainful McDonald by bullishly declaring: “I know how to handle myself.”

He was talking about holding his own at meetings of the North-South Ministerial Council, but it could just as easily have been a cry of exasperation after weeks of criticism of his early performance in the top job.

Naturally the Sinn Féin president zoned in on what she called the “absolute public confusion” caused by the Government’s “green list” of countries people can now visit but really shouldn’t. And as leader of the main opposition party, it would have been a dereliction of duty to overlook the extremely unhelpful intervention of the former taoiseach, now Tánaiste, in the run-up to the publication of the controversial list.

“Yesterday you were at odds with the Taoiseach, and the confusion between your two selves hardly adds to public confidence,” boomed a confused Mary Lou, to the, eh, Taoiseach. This could have been a gratuitous attempt at an insult, but it was clear from her expression that it was a slip of the tongue. She wasn’t taking a sly dig at Micheál over jibes about Varadkar behaving like he is still in charge.

Did Martin notice it? Or was it lost in the litany of shortcomings listed by McDonald in his Government’s handling of advice on international travel?

Its approach was “cack-handed” and “reckless” and smacked of an administration operating “on a wing and a prayer”. And on she went.

There is a very brittle edge to the exchanges between Martin and McDonald. There is a sense of growing antagonism

In reply the Taoiseach decided to proffer some unwanted advice to the Sinn Féin president, who now occupies that place across the parliament floor that he filled for nearly a decade.

“When I was leader of the opposition myself, I saw my role to be essentially one of a constructive contribution to protecting public health and rising above partisan political sniping,” said butter-wouldn’t-melt Micheál, talking down to his replacement from the lofty heights of amnesia.

Pearse Doherty sniped back, “Is that directed to the Tánaiste?”

Micheál explained that he was clear in his mind that the safest thing for people to do would be to stay at home this year and not travel abroad. But the 15 countries in the list have a lower infection rate than here, so his Government is taking a very “conservative” approach to the matter of overseas travel.

Not so in the North, where Mary Lou McDonald’s party “had a view that it was okay to open up the island to 59 countries” and signed up to in the Northern Ireland Executive two weeks ago.

“I understand that there are different jurisdictions and all of that, but this was signed off on by Sinn Féin in Northern Ireland. That has to be said.”

Across the other side, Mary Lou couldn’t believe her ears. “Wow,” she mouthed.

As for all that sniping, the Sinn Féin leader indicated it wasn’t coming from her ranks. Presumably the party has that filed under L for “Legacy issues” now.

There is a very brittle edge to the exchanges between Martin and McDonald. Their bouts of parliamentary sparring have barely begun but already there is a sense of growing antagonism between the two.

The Taoiseach has been challenging her choice of robust language and combative debating style. The Sinn Féin leader listens to what he says with barely disguised contempt, like when he outlines for Independent TD Michael McNamara the expert advice he has received on whether or not quarantine for visitors returning from unlisted countries should be mandatory.

It’s “questionable” if this is the right approach, he told the Dáil, as this had resulted in Covid-19 clusters breaking out among quarantined groups in some places.

Mary Lou rolled her eyes to heaven and tut-tutted her disagreement, telling him in weary tones that it was about quarantining the “right” people.

“That happened,” insisted Micheál, as a clamour of protest rose from the Sinn Féin seats. “Sorry. That did happen,” he repeated, to noises off from the side of the theatre.

The barracking from Mary Lou and her cohorts continued. “I’m responding to deputy McNamara,” snapped the Taoiseach.

It really is a shame that they don’t sell popcorn in the Convention Centre when the Dáil is sitting, because TDs all around the auditorium were riveted.

A chorus of “Oooooh!” went up.

But it wasn’t long before hostilities resumed. This time it was during questions to the Taoiseach on matters relating to his department. Northern Ireland was one of the subjects up for discussion, and the Sinn Féin leader urged Martin not to adopt a “passive” approach to the Covid-19 emergency at the next meeting of the North-South Ministerial Council because an All-Ireland approach to the crisis was needed.

“We need it to be energetic,” she told him, urging him to work actively to achieve a “coherent single-island approach”.

While not wishing to throw “brickbats” at Sinn Féin (must be because the general election is over), he repeated that the party signed off on opening up 59 countries in terms of travel.

“There are two public health jurisdictions, whether you like it or not,” he told Mary Lou, who was giving out yards across the way.

“There’s no need to be calling in the good Lord now, in terms of your responses,” chided Micheál. “You can’t have it both ways.”

And as for that upcoming meeting? “I do have experience in the past of North South Ministerial Councils,” he began.

“I remember,” she sighed.

“Yeah, and it was a very positive one,” Micheál recalled. “I know how to handle myself in a North South Ministerial Council.”

He finished with one last, barbed word on how best to conduct business in Northern Ireland, telling the highly affronted Sinn Féin leader: “You’ll get nowhere if you think that if you just hector people or lecture people that they’re all going to fall in line.”

That should improve ongoing relations between the two.