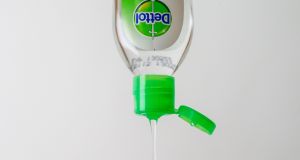 It is the guiding principle upon which they all agree. A sacred rule of political life they dare not transgress. Everything comes down to looking after that seat.

And when deputies returned to the Dáil on Tuesday, they were asked to roll up their sleeves and do it for real.

That was a different story entirely.

In an effort to reduce the number of “sanitisation breaks” on sitting days when the chamber is cleared for a thorough cleaning, politicians have been asked to do this job themselves.

A directive went out before this week’s session with news that “the Dáil Business Committee has approved a new process whereby members sanitise their own seats in the Dáil chamber”.

How might that happen? Boiling water? Prodigious farting? Sanctimonious licking? Some TDs already believe the mere act of placing their hindquarters on Leinster House leather renders it immaculate.

The instructions were clear. In addition to using hand sanitiser before entering the chamber, they should now “sanitise seats before occupying them and sanitise them again before leaving them”. To this end, a supply of “disinfectant wipes, together with small plastic bags” was left beside each “approved” seat (most of them are decommissioned in line with social-distancing requirements).

Which sounds simple enough, but it proved a request too far for most deputies.

“Members are required to wipe the armrests, desks, microphones and other contact points, and then to place the used wipes in a plastic bag and tie a knot in the bag in order to secure the used wipes. When leaving the chamber, each member should place the bag(s) of wipes in a pedal bin.”

That’s fairly easy to understand. We lashed into the chamber early to see how they managed.

Following a rebuke last week from the Ceann Comhairle about the lax observance of Covid-19 social distancing and mask wearing requirements by some TDs, would they be able to cope with this new wipedown directive?

Before the 2pm start, the handful of deputies on duty for Leaders’ Questions trickled into the chamber. There was some curious handling of the little drums of wipes placed under each seat and the mini-bottles of hand sanitiser on each ledge. For a few strange moments it sounded like a castanets concert was under way in the chamber with the clicking up and the clacking down of all the plastic caps.

We were suddenly assailed by a strong bang of alcohol fumes. Like the old days in the Dáil, when rampant all day drinking was the norm .

The Taoiseach gave the space in front of him a few perfunctory flaps of a wipe. The Rural Independents trio of Michael and Danny Healy-Rae and Mattie McGrath were valiantly trying to get to grips with the cleaning materials.

Danny Healy-Rae has acquired a visor, which represents a great leap forward. Unfortunately it looked a bit the worse for wear, curled up alarmingly at one corner and buckled under the eyes, like somebody sat on it. Still, the Ceann Comhairle must have been delighted to see him making an effort.

Brother Michael cleaned down his area very well but unfortunately ruined everything by leaving the used wipes in a big pile on the ledge for somebody else to pick up and bag. Which eventually happened when the House rose anyway for a “sanitisation break” and a little woman wearing a gingham pinny came and took the stuff away.

Politicians are great for making and pontificating about rules, but not always great at observing them in their private bailiwick of Leinster House.

Mary Lou McDonald (you’d know she’s a mammy) put them all to shame. The Sinn Féin leader bustled in with party whip and business committee member Pádraig MacLochlainn and they set about their designated pews like a crime scene team.

And when she was finished, Mary Lou bagged everything up, ready for the bin. Across the floor, Fine Gael’s Emer Higgins also got stuck in with the wipes. Social Democrats co-leader Róisín Shortall was similarly meticulous.

Ah, but the lads. Apart from the Socialists (well done, Mick Barry and Paul Murphy), they weren’t great.

Mattie couldn’t get the top off his plastic drum. The Taoiseach was on his feet and starting Leaders’ Questions when Mattie finally managed to extract a few bits of sterilised cloth. He held one in each hand, just looking at them.

Then he wiped his clear plastic visor with them.

As more TDs came into the chamber during the session, it seems they didn’t feel the need to do any more wiping or sanitising. One after another they came in and sat down, without dabbing a drop of disinfectant anywhere.

There was a lot of talk of support “bubbles” from the party leaders. This, along with the alcohol fumes, was very disconcerting as we kept thinking they were referring to Michael Jackson’s beloved chimp of the same name. What’s up? Is he all right? Did they put money aside for him in the budget?

Happy to relate Bubbles is still living at the ripe old age of 37 in a Florida retirement home for apes, having turned aggressive in his late teens (who could blame him), forcing the musical superstar to hand him over to an animal sanctuary.

To avoid any confusion, the Taoiseach and others deputies were talking about “social bubbles” in the context of Covid-19, as opposed to measures to assist antisocial Bubbles. However, support bubbles/Bubbles can be interchangeable.

Some TDs took the little bottle of sanitiser and put it in their pocket but didn’t wipe down their station. Danny gave the inside of his visor a vigorous scrub.

Shortall was first to leave after Leaders’ Questions gave way to the Order of Business. She meticulously cleaned all around her before bagging up and heading off to find a pedal bin. Sean Canny of the Regional Independents also removed his sanitising wipes after use. They were among the very few who bothered going along with the directive.

The shining exceptions were the disciplined Sinn Féin TDs, almost all of whom complied with the requirements, even before a new session began and nobody was watching.

When he was done with his lengthy stint in the chamber, Taoiseach Micheál Martin gathered up his files and left. In common with the majority of TDs throughout the sitting, he didn’t sanitise his area before he left either.

For deputies, a Dáil seat is far more important than a mere seat in the Dáil.

Still, for all the myths peddled about TDs and their supposed peccadilloes, we never thought we’d see the day when the authorities would have to order them to wipe down their seats when they were finished in the chamber.

That’s the pandemic for you.