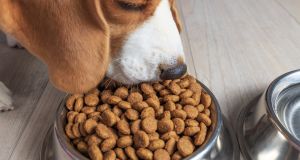 Dogs’ dinners these days are not to be sniffed at.

The man who put doggies’ Din-dinsgate on the political menu this week goes by the name of Woulfe.

And we hear the Taoiseach wasn’t very impressed when he found out that his Attorney General told a group of media curs that Shane Ross’s Judicial Appointments Bill was about as coherent as a can of Pedigree Chum. Séamus Woulfe made his remarks when he thought they would go no further than the four walls of Buswells Hotel and the ears of the salivating hacks who heard them.

It may be some comfort to the AG Woofe to note that, while Winston Churchtown’s Cabinet colleagues are at pains to point out his Bill has their full support, they haven’t been entirely supportive on the dog’s dinner front. As the Taoiseach said yesterday, there are still a number of “difficulties” to be ironed out, a few things which may have to be tweaked and some aspects to be “refined” at Report Stage.

During Leaders’ Questions, Independent Mick Wallace, who is occasionally accused of looking like a dog’s dinner in the parliamentary chamber due to interesting wardrobe choices, said the AG had overstepped the mark with his comments and had, in legal parlance, “scandalised the court”.

Leo Varadkar replied he couldn’t say very much about the episode as the din-din remarks were “off the record and in private”.

Séamus hadn’t spoken in public, he explained. The AG made his comments at “a private luncheon” which was organised by a distinguished assassination, sorry, association of journalists.

Whereupon all the TDs burst out laughing.

Doggone it, that’s a turn-up for the books.

Sad Leo, like a pooch trotting happily towards the park only to be duped by a sharp right in the direction of the vet, said he was “disappointed” to hear fellow TDs laughing about journalists bending established rules of engagement (a hotly contested point, as it turns out).

Meanwhile, the leader of Fianna Fáil completely veered off the scent of the day’s big political stories.

Micheál Martin had a tantalising basket of toys at the start of Leaders’ Questions and could have picked any one he liked.

He could have taken out the Attorney General and thrown him around the place like a Frisbee. He could have gone for the stuffed Russian diplomat bear and worried it to bits in front of Leo. He could have inserted a fang into the well-chewed Strategic Communications Unit to see if there was any squeak left in it at all.

Or he could have clamped his jaws around Simon Coveney’s throat and dragged him round and around the chamber floor, flipping him into the air like a rag-doll before losing interest and dropping him on a step for the Ceann Comhairle to trip over on his way out.

But no. Micheál asked about teachers, our marvellous teachers who must be cherished and looked after by the Government and given equality of pay and what is the Taoiseach going to do about this and when?

Then we realised that the Teachers’ Conferences are on this weekend, when delegates will be taking the high art of behaving like a dog with a bone to the usual stratospheric levels. The Fianna Fáil leader has been making eyes of late at the teachers and the nurses and other big groups of public servants.

Anyone would think there’s an election on the horizon.

Good boy, Micheál – that’s the old dog for the hard road coming out in him.

It has to be done, if Fianna Fáil’s (Red Mills) Leader is to make any sort of decent Gain so his troops can be the big IAMs again and he can truly aspire to the tray of Cesar. This would make Micheál a very happy Chappie indeed.

But back to the Barking Heads in the Dáil chamber.

The dog’s dinner that is the Special Communications Unit didn’t merit a look in, now that it has gone off. The Opposition displayed no interest.

But the Minister for Foreign Affairs, on the other paw, seemed a very juicy morsel.

Having changed his position on abortion to support the Government’ proposal to legalise terminations in the early stages of pregnancy to a cut-off point of 12 weeks, Simon Coveney followed up with a proposal that if this legislation is enacted, a two-thirds Dáil majority would be needed to amend it in the future.

That way, nobody would be in doubt as to his strong feelings on the matter.

Only one problem – which neither the impeccably bred Coveney or any of his Pedigree Chums managed to sniff out – such a move would be patently unconstitutional.

What was he at? Had he been on the Brandy or overdosed on the Rinti?

Five newspapers, it was pointed out to the Taoiseach, ran with his unfeasible proposal yesterday morning. Even Micheál forgot the teachers to mention this, along with Mary Lou McDonald, who, in uncharacteristically placid mood, suggested Coveney “misspoke on the matter”.

“I mean, how could the Tánaiste make an assertion like this?” wondered Mattie, quoting Fianna Fáil TD Thomas Byrne who earlier said on radio that a transition year student wouldn’t make such a basic error.

“How did this get into five newspapers today? Are you really, really trying to turn the people off you, because it is about politicians. It is about trusting politicians to make legislation here in the future and, quite frankly, the people that I’ve met and been talking to aren’t going to touch you with this and it’s utter confusion you are creating.

Out of the traps

Leo was out of the traps with his answer. Simon’s suggestion is a non-runner.

Did the Taoiseach feed his Tánaiste to the pack? Coveney’s people were quick to underline that their boss still completely backs his Government’s abortion stance.

They are letting sleeping dogs lie.

“Well, that was a dog’s dinner,” concluded Thomas Byrne.

And what’s wrong with a right dog’s dinner?

Give the Taoiseach a bowl of Winalot at the next election and he’ll bite the hand off you. It’s what he dreams about.

The same goes for the rest of them.

Winalot – makes them all sit up and beg.