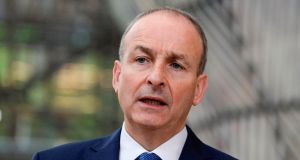 There is no escape. Wednesday’s Covid-19 furore followed a familiar pattern.

Who knew what and when, and why were they not told, and how did this happen and whose fault was it and where do we go from here and would you look at the latest figures and with the clocks going back and everyone in a terrible state do you think we’ll ever get a vaccine?

Just another day in the Dáil.

The latest twist came courtesy of The Irish Times, with the explosive TNT revelation that the country’s much vaunted test-and-trace system collapsed when the very much expected second wave arrived unexpectedly.

A case of all test and no trace making Jack and Heaven knows who else, a very ill boy.

Overwhelmed by the spike in infection rates, the HSE was forced to ask over 2,000 people who tested positive over the weekend to carry out their own contact tracing exercise and get in touch with people to say they might have given them the coronavirus.

Assuming, as Labour’s Alan Kelly pointed out, all those individuals who tested positive are still well enough to do the HSE’s work.

Close encounters of the Covid kind, running on continuous loop in everyone’s head. And nobody knows the ending.

When the Taoiseach addressed the nation on Monday night to deliver his Government’s two-day warning of a six week lockdown, he looked shattered. At midday on Wednesday, when Opposition leaders rightly looked for explanations over the latest setback, the strain showed on Micheál Martin’s face. He looked pale, with dark circles under his eyes as he detailed figures and elaborated on possible post-lockdown scenarios.

Nobody told him about the weekend collapse of the HSE’s tracing operation. He only found out about it when somebody (not from the HSE, he pointed out) showed him a text of The Irish Times story on Tuesday night.

Kelly wondered if the situation would ever have come to light were it not for the work of the journalists. Nothing “secretive” about it, responded the Taoiseach. How could it be when a couple of thousand people would be getting text messages about it?

But finding out from the media that the onus of identifying people in the community carrying the infection was put on untrained members of the public was embarrassing for Martin. Even more embarrassing for his Minister for Health, who apparently didn’t know about the HSE TNT meltdown either, although a question to the Taoiseach from Kelly about when Stephen Donnelly became aware of the problem went unanswered.

Catherine Murphy of the Social Democrats was “absolutely shocked” Micheál should have to find out by text. Why didn’t the people who are supposed to let him know about these things tell him?

Asking people to carry out their own “DIY contact tracing” she said incredulously. “It’s just not good enough.”

Sinn Féin’s Mary Lou McDonald warned that we lose control of the virus when the testing-and-tracing system isn’t up to scratch.

The Taoiseach couldn’t gloss over the facts. “I’m not happy, and I’m disappointed,” he said, acknowledging that the system had been overwhelmed “because of the extraordinary demand”.

He looks like he’s barely had a wink of sleep and somebody has cocked up royally by leaving him out of the TNT loop and leaving him open to attack in the Dáil and then, just to compound his plight, Micheál also had to contend with pitying words from Kelly.

“I also have a degree of sympathy and sorrow for you and particularly for Minister, Deputy Donnelly, because it is obvious that you were not aware of this up until very recently,” said the Labour leader, generously, reminding the Taoiseach he’d been out in public and in the Dáil giving everyone great confidence in the system. Only for this to happen.

Sympathy and sorry from AK47? Thoughts and prayers for the Taoiseach.

Independent Cathal Berry, a medical doctor and former Army officer, was last to speak in this depressingly Covid heavy session of Leaders’ Questions.

The representative of the Regional Independents Group gave some consolation to Micheál, declaring himself “generally supportive” of the move to Level 5 lockdown which he believed “a sensible and prudent thing to do” under the circumstances.

“However, I wish to focus on something which is more hopeful,” he added, in a welcome diversion from the pervading gloom. The Kildare TD wanted to know what the Taoiseach knows about the potential discovery of a vaccine.

Meanwhile, Fianna Fáil’s Niamh Smyth was on the panel for RTÉ’s live Leaders’ Questions programme, taking up the cudgels on her boss’s behalf. The Monaghan TD wasn’t impressed to hear that people could test positive and their contacts not immediately be notified. And, going on descriptions from Catherine Murphy of the complicated recruitment process for tracers, it seemed “like bureaucracy gone mad”.

She was in no doubt that “clearly a ball has been dropped somewhere along the line and I have no doubt that the Taoiseach and the Minister will investigate and interrogate that as to why they weren’t given that information . . . I mean, that’s not good enough if the Taoiseach could learn that from a text message of a newspaper article, certainly not in the middle of a pandemic.”

And where that pandemic is concerned, Richard Boyd Barrett of People Before Profit was still reminding people his party was the only one in explicit favour of the lockdown when it was first proposed two weeks ago. Not because he wants lockdowns, but because it is the only way to properly pursue an “elimination strategy”.

He gave an excellent and exciting summary of what he means by this.

“The elimination strategy is about getting rid of community transmission [which we almost had done in June] and then having a tracing regime that can pounce like a fire brigade on an outbreak of fire. Zero-Covid is like a zero-fire. It doesn’t mean you never have a fire but the intention is never to have an uncontrolled fire and then you’ve got a fire brigade that can jump on the odd outbreak. That’s what zero-Covid strategy is about . . . Now that is a prize worth pursuing, in my mind, as an alternative to having lockdowns for the next year. It needs to be taken seriously on an all-Ireland basis.”

But this is not a runner for the Taoiseach.

“We are conscious we are in two jurisdictions,” he countered, adding he didn’t think it would be possible to seal the border. Furthermore “We are not New Zealand”.

Close encounters of the Covid kind.

Unfortunately, we are not alone.