Minister moves to re-assure Dáil on commitment to air ambulance

Warnings service under threat because of staff retention problems 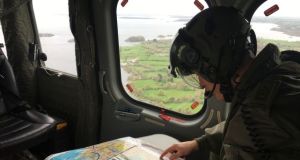 Minister for Communications Richard Bruton moved to re-assure the Dáil of the Government’s commitment to the air ambulance service.

It came after warnings that it is under threat because of staff retention problems.Fianna Fáil deputy leader Dara Calleary issued the warning when he highlighted the reduction in operations of the Defence-Forces run service. He said there were 848 hours of flying time in 2016, which dropped to 581 hours last year and he asked “are you going to let that fall further in 2019”.

The Mayo TD quoted a €24 million salary under-spend to date this year in the Defence Forces as he accused the Government of sending back money while they were letting personnel leave.

But in the meantime the air ambulance service which dealt with 158 car crashes and 146 medical emergencies in 2018 is on the brink of collapse he said, quoting director of Raco (the officers’ representative body) Comdt Conor King.

Mr Calleary said lieutenant-colonels and senior managers are now obliged to fly the service because of the numbers leaving the force.

“When is this Government going to finally cop on and wake up to what you’re doing to the Defence Forces?”, he asked and claimed that there was “ignorance” in Government about the scale of the staffing issue.

Mr Calleary asked if the Government would end up in a situation where the service will not be available to someone who needed it urgently. “When that happens there will be an emergency response, then there will be the usual statements of regret and intent.”

Mr Bruton said there is no doubt there were difficulties retaining Air Corps staff.

Replying for the Government at leaders’ questions, he stressed the “absolute” commitment to the service. He said they were tackling the issue.

A pilot retention scheme was being put in place to deal with and retain staff and maintain staffing levels, following the recommendation of the recent commission on pay.

The Minister pointed out that the private sector airline industry had been booming and there was huge international pressure on demand for pilots which had undoubtedly been a challenge.

“I am pleased to be in a position to absolutely confirm the commitment of Government to the air services and our commitment to work with the Defence Forces to meet the undoubted challenges there”, he said.

But Mr Bruton warned that the Government had to meet the demand of difference sectors of the public service “within an integrated context”.

Mr Calleary said that assurances were not enough and claimed the Government had not followed up on its assurances through recruitment to address the gaps in the air ambulance service.

The Minister stressed that the public pay commission specifically highlighted the Air Corps as an area that needed to be addressed and this had been done and had been accepted by Raco.

1 Over 2,000 buyers bid for first affordable homes planned for south Dublin in years
2 Storm Dennis washes abandoned ‘ghost ship’ onto rocks off Co Cork
3 Caroline Flack death: Public disquiet over media conduct grows
4 Forget a grand coalition – here is what the next government will most likely look like
5 Fine Gael faces internal resistance to a grand coalition with FF and Greens
Real news has value SUBSCRIBE