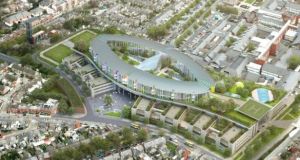 There are no plans to sell the naming rights of the new national children’s hospital, despite a memo to Cabinet from Minister for Health Simon Harris citing potential to generate significant contributions through such sponsorship.

A spokeswoman for the Minister said that “as previously announced, the naming process will be undertaken by the Children’s Hospital Group. The process will end with a short list of names submitted for Government endorsement prior to announcement.

“The Children’s Hospital Group is examining philanthropic opportunities but the Minister believes it is more acceptable that any naming rights would be confined to areas in the hospital.”

The confidential memo to Government from Mr Harris acknowledged that the public naming process may be the preferred option but the case for naming rights sponsorship opportunities for component parts of the hospital is “very strong in light of the funding challenge”.

The document, as reported in The Irish Times, also stated there was “potential to generate significant funding contributions through naming rights sponsorship for the hospital name itself” and cited examples in the US including the sponsorship by golfer Jack Nicklaus of a children’s hospital in Miami.

The Minister said there was no history of this approach in the public health system here and his preferred option was to confine possible naming rights to areas of the hospital.

Mr Harris’s spokeswoman said that “no decisions have been made on the issue of naming any part of the hospital. Children’s Health Ireland will further explore all opportunities as part of their work on philanthropy.”

The memo stated that the total bill for developing the facility at St James’s Hospital is now expected to be more than €1.73 billion.

Sinn Féin health spokeswoman Louise O’Reilly said she was “appalled” at the suggestion of naming rights being sold.Ms O’Reilly said “the inability of the Minister for Health to stay in charge of or on top of budgets is hardly news but the notion that he is examining the selling off of the naming rights for the hospital or any part of it most certainly is”.

Her party’s suggestion that the hospital be named after Dr Kathleen Lynn, the founder of the first children’s hospital in Ireland was rejected by the Government and Fianna Fáil.