Blame for controversy does not lie with politicians, says Heather Humphreys 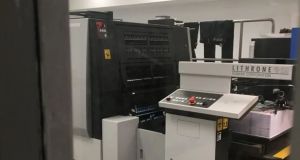 The printer was too big for the building it was to be housed in. Photograph: RTÉ News

Minister for Business Heather Humphreys has described the Dáil printer controversy as “absolutely outrageous” a day after it emerged the full cost of the project was about €1.8 million.

The printer was too big for the building it was to be housed in, meaning building work had to be carried out before it was installed, adding significantly to the overall cost of the project. The machine has yet to be used as industrial relations issues are dealt with.

“I think it’s absolutely outrageous what has happened here,” she said during an interview with RTÉ Radio’s Seán O’Rourke. However, she said politicians were not to blame for the debacle, rather public servants had not done their jobs properly.

A report, compiled for the Public Accounts Committee (PAC) by the Clerk of the Dáil Peter Finnegan has been unable to ascertain why the Oireachtas authorities went ahead and ordered a printer that was too high for the printing room.

The report found the company which supplied the printer had recommended a ceiling height in excess of that available in the room in its tender documents. The report also details the full range of costs associated with the installation of the new printer.

It says there were five components, or “lots”, in the original tender with a total price of €1.37 million.

Separately, the installation works cost €229,000 excluding Vat. The Office of Public Works “took the opportunity” to carry out further upgrades on the building which will cost an additional €195,000, though it stresses that these works were not required to deal with the height issue.

This amounts to a total outlay associated with the printer of almost €1.8 million.

“Some people seem to think that because this happened in Leinster House it is automatically the fault of politicians. I just want to be clear – this is nothing to do with Leo Varadkar or Micheál Martin or Brendan Howlin or Mary Lou McDonald,” Ms Humphreys said.

“This is a case of someone in the public service not doing their job properly. If I was buying a wardrobe or a bed, the first thing I’d do is measure it to make sure it fits in the room.

“It really does beggar belief with sums of money like this at play how that wasn’t done properly and this is a matter for the House of the Oireachtas.

“They’re not a Government department or a State agency, they’re controlled separately from Government and it’s up to Ceann Comhairle and the Houses of the Oireachtas Commission to account for them,” said Ms Humphreys.

“At the end of the day a public procurement must show value for the taxpayer, and in the eight-page report which I didn’t have a chance to look at, issued by the accounting officer of the Houses of the Oireachtas, a number of questions still have to be answered,” she said.

“We need to establish all the facts and the PAC has a body of work to complete and I understand they forwarded a series of points to be clarified by the Houses of the Oireachtas service.We will have to await the outcome of that.”