Veteran politician beats DUP by almost 10,000 votes even as share of poll slips 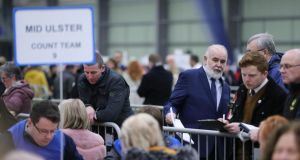 The Mid Ulster boxes were the first to arrive at the count centre in Magherafelt on Thursday night, and, as the local constituency, it was the first of the eight being tallied at Meadowbank Sports Arena to declare.

Nobody expected any surprises here. The veteran Sinn Féin politician Francie Molloy was sitting on a comfortable majority of more than 12,000 votes, and at 3am he was duly re-elected with 45.9 per cent of the vote.

Sinn Féin has held Mid Ulster for 22 years, since the late Martin McGuinness, the former deputy first minister, first won it for the party, in 1997. He was the constituency’s MP until 2013, when he was replaced by Mr Molloy in a byelection.

Mel Boyle of the Alliance Party increased the party’s share from 2.3 to 7.9 per cent, while the SDLP’s Denise Johnston increased her party share by 4.5 percentage points.

Turnout in Mid Ulster was 63.83 per cent, down by almost 5 percentage points compared with 2017 but still slightly ahead of the turnout in Northern Ireland as a whole, which stood at 62.09 per cent.

In his acceptance speech, Mr Molloy said it had been a Brexit election. “Brexit has wrecked the entire political process, and it is going to wreck the Union as well. The one certainty for us to return to the European Union is Irish unity. That’s the open door we have to Europe, and I would hope to continue that as soon as possible.”

1 UK to close borders to non-English speakers and unskilled workers
2 New Sinn Féin TD apologises for ‘glib, off-the-cuff tweets’
3 Draining the swamp? Trump in spree of clemency for rich white men
4 A Russian cruiser with ‘cannibal rats’: What other ‘ghost ships’ could be out there?
5 Jump in young Irish adults living with parents among highest in EU
Real news has value SUBSCRIBE