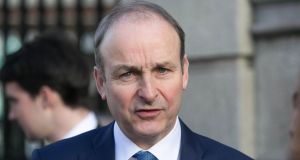 Fianna Fáil leader Micheál Martin said the case of a young man jailed for the possession of child pornography images was a shocking indictment of the “slow response to the threat on behalf of the Irish State”. Photograph: Gareth Chaney/Collins

Fianna Fáil leader Micheál Martin has called on the Government to wake up to the dangers facing children online and move to appoint a digital safety commissioner.

Responding to the case of a young man jailed for the possession of child pornography images, Mr Martin said it was a horrific case which exposed the glaring loopholes in Government policy.

The case, he said, was a shocking indictment of the “slow response to the threat on behalf of the Irish State”.

“We have already made it clear that we will be using our influence in the Dáil to insist on the immediate appointment of a digital safety commissioner,” he added, stressing the dangers facing children needed to be met with urgency by the Government.

Minister for Communications Denis Naughten said he would raise the need to appoint a digital safety commissioner with his Cabinet colleagues next week.

The Minister has championed the formation of a digital safety office for a number of years but said recent events had demonstrated the necessity of its establishment.

Acknowledging the difficulties in passing legislation to place it on a statutory basis, Mr Naughten has said he would move to appoint a commissioner this year and would meet with the Australia’s e-safety commissioner Julie Inman Grant in the coming days to discuss.

“The internet is a wonderful tool to enjoy and learn from but it is also a dangerous place that combines anonymity and distance too easily,” he said.

Minister for Justice Charlie Flanagan also told The Irish Times his department was seeking to address a number of gaps in legislation.

The Minister said the offence of harassment would be extended to include all forms of communication, including through online or digital communications.

The taking and distribution of intimate images without consent will also be addressed as part of a series of reforms, the Minister said.

Mr Flanagan added he would work with Mr Naughten to progress policy.

The Minister also confirmed he met other European Union justice ministers this week to discuss the need for internet service providers to ensure that hate speech online was identified and removed.

A spokesman added: “Minister Flanagan is strongly supportive of the [European] Commission’s engagement with the service providers and the regular monitoring of the implementation of the code of conduct for tackling hate speech online.”